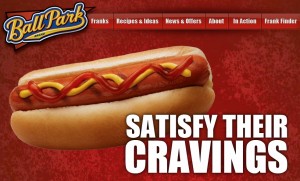 Steve’s breakdown: Who knows what Sara Lee is looking for when they say they’re “exploring creative opportunities.” It’s always worth a call to find out.

DOWNERS GROVE, IL: As the battle for the bun heats up, the nation’s top two wiener purveyors seem to agree on strategy — a focus on all-natural products — but one is making a last-minute change to the lineup.

With grilling season upon Oscar Mayer and Ball Park, the latter is conducting an agency review.

Omnicom Group’s TBWA/Chiat/Day had been working with Sara Lee’s Ball Park brand since 2004, when the agency picked up that and brand sibling Jimmy Dean. Prior to TBWA, Ball Park was at Publicis Groupe’s Leo Burnett, Chicago.

A Sara Lee spokeswoman said only that the brand is “exploring other creative opportunities” and “our relationship with Chiat remains very strong.” TBWA will continue to work on Sara Lee’s Jimmy Dean and Hillshire Farms brands.

It’s not an opportune time for a review, considering that summertime is perennially the stage for the battle of the hot-dog brands. In 2009, Oscar Mayer launched a nasty campaign against Ball Park, saying the Kraft brand beat Sara Lee’s in a taste test. Sara Lee reacted quickly, issuing a lawsuit, which remains unsettled.

This summer appears as if it will be a little more subdued. Rather than going on the offensive, the focus seems to be on products that have no artificial colors, flavors or preservatives — and for Oscar Mayer, messaging that surrounds spending time with family.

Ads for the Oscar Mayer summer hot-dog push are already airing, produced by Dentsu’s McGarryBowen, and will likely run through Labor Day. Print and digital efforts will be incorporated as well. Oscar Mayer this season will focus on Oscar Mayer Selects, a line of hot dogs introduced in March 2010 that have no artificial preservatives. Kraft will also serve the Selects from a traveling Wienermobile-turned-food truck.

Sara Lee just launched Ball Park Deli Style Beef Franks, hot dogs that have no artificial colors, no artificial flavors, no by-products and no MSG added. And while the company will be promoting the new product this summer through print ads from indie agency Launch Creative Marketing and Facebook promotions executed by PR agency MWW Group, the Sara Lee spokeswoman declined to say exactly how much of the marketing mix will be on the new hot dogs and how much will be for Angus-beef print ads by TBWA, or whether any TV spots will air.

Both companies acknowledge that summer is a key season for hot-dog sales — Kraft, for instance, sells more hot dogs in June than in any other month — but neither would provide figures. Kraft last year spent 64%, or $7.4 million, of its U.S. measured media on Oscar Mayer hot dogs from June through August, according to Kantar. Sara Lee spent 57%, or $7.5 million, of its Ball Park budget in the same period.

Ball Park was No. 1 in the frankfurter category for the 52 weeks ended April 17, with almost 20% market share and $343.2 million in U.S. sales, according to Symphony IRI. Kraft’s Oscar Mayer hot dogs are second in market share at 16.5%, though its sales fell 7.3% in the same period to $284.3 million. That does not include the Selects line, which IRI estimates at about $38.7 million in sales and 1.2% share, good for a No. 8 ranking in the hot-dog category.

Kraft, however, takes issue with those figures. The spokeswoman cited Nielsen, saying that Oscar Mayer hot dogs had 20.4% market share with $349.5 million in sales in the most recent 52 week period ended April 23, up 3.8%. That number includes sales for the Selects line, but like IRI’s data, it does not include Walmart.