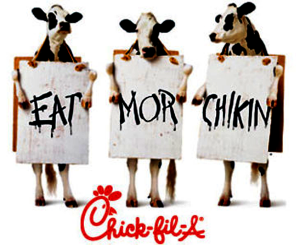 Steve’s breakdown: There’s an ad review going on over at Chick-Fil-A but it’s not for AOR. Worth checking into.

ATLANTA, GA: Chick-Fil-A is reaching out to creative agencies.

The focus of the work in play was not immediately clear, but the company said it’s not for the core creative duties on its account, which is at Richards Group. That could mean it revolves around a new product, a particular meal time or a specific new campaign.

“While we have issued an RFP for an isolated project, The Richards Group is still our agency of record,” a company spokeswoman said in a statement, declining to elaborate.

Dallas-based The Richards Group has handled advertising for the chain since 1995 and created the well-known “Eat Mor Chikin” campaign.

Some agencies declined to proceed after receiving a non-disclosure agreement from Chick-Fil-A in recent weeks because of a clause giving the marketer ownership of any ideas proposed, according to people familiar with the situation.

Richards Group did not immediately respond to requests for comment.

Chick-Fil-A got a new chief marketing officer earlier this year when Jon Bridges, who has been with the privately held company since 1992, was promoted to the role. Steve Robinson, who led the marketing department for more than 30 years, is retiring but staying on in an advisory capacity for this year.

Chick-Fil-A is not a big marketing spender, but the chain in recent years has been growing significantly, posting big sales gains well beyond other fast food companies. Last year the company had $5.78 billion in U.S. systemwide sales, according to Technomic, up 14.4% from $5.05 billion.