Steve’s breakdown: We love this sort of thing. So watch the video and get your craziest creative team and go for it.

SAN FRANCISCO, CA: Much of adland is consumed by the onslaught of major media-agency reviews underway, with creative reviews lagging far behind. But Lyft has taken an unusual step to raise the profile of its search for a lead creative agency: putting a call out for a “wildcard” agency on Twitter. 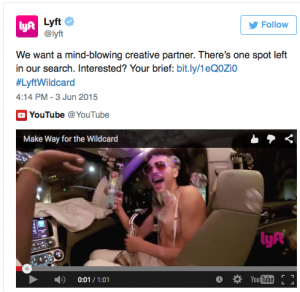 “We’ve asked big agencies to pitch our business,” the accompanying video says, “but we root for the little guys too, so this is your chance to take the last seat at the table.” The brief asks for a video with three requirements: that it runs no longer than 60 seconds, that it takes place in a Lyft car and that it “creatively embody the lyft brand.”

It shouldn’t come as a surprise that this call for agencies does not involve a search consultant, and it wouldn’t be the first time a marketer has included a small shop in a review that mostly involves bigger agencies.

The process is being overseen by Lyft CMO Kira Wampler and Creative Director Jesse McMillin, who said part of the impetus to put a call out for agencies was “wanting to take a look at the RFP process.”

“The Lyft brand is really about making things exciting and experiential, down to the way we communicate with potential partners,” he added.

Said Lyft in a blog post: “Lyft is looking for an Agency of Record for 2015. We’ve already sent out requests for proposals (RFPs) to several large, impressive agencies, as organizations in our position traditionally do. But since doing things the traditional way has never been our style, we’ve decided to mix up the RFP process.”

Lyft has already invited nine agencies to the review, which it describes as a search for for an agency of record for 2015 (even though the year is half over). The tweet was a call to fill the tenth slot with what the company is calling a “wildcard” agency — one that executives at Lyft may not have known about, one that is smaller, or one that has an idea that Lyft would have never thought of. And the agencies responding to the call on Twitter will have to jump through a hoop — creating the 60-second video — that the other nine did not.

The nine agencies, did, however have to respond to the invitation. Mr. McMillin sent an empty envelope to each of the nine agencies, asking them to send it back to him with anything that demonstrated why the agencies wanted to work with Lyft or how they’d be good partners. Mr. McMillin declined to identify the agencies, but said one responded to the invitation by taking consecutive Lyft rides from its office in Colorado to San Francisco, where Lyft is headquartered.

Individuals are also free to submit videos, although Mr. McMillin said that given the level of work that Lyft will need, “you probabaly need a healthy structure.” He added that “leaving it open and making it fun and irreverent is setting the tone for what I want and will open the door to talk to talented and creative people.”

Agencies responding to the wildcard call will have to publicly submit their video — and therefore, ideas — in a tweet. When asked whether the agencies who submit for the “wildcard” slot will be able to keep their ideas, Mr. McMillin said yes. “Lyft isn’t the owner of the things submitted,” he said.

Earlier this year Lyft began a campaign by San Francisco-based Eleven, but Mr. McMillin said that Lyft has never really had a long-term lead agency of the sort he’s seeking now. Eleven was among the nine shops invited, he said.

According to the terms and conditions, whoever or what ever is selected for the tenth spot is only guaranteed “the opportunity to participate in one round of interviews in front of the Lyft brand team in its agency search.”

“There is no monetary value associated with the Prize and there is no guarantee that the Winner will advance to final interview rounds,” the terms and condision say.