Nirula’s scouts for a creative partner: Could be more than one brand involved

Home Accounts in ReviewNirula’s scouts for a creative partner: Could be more than one brand involved

Nirula’s scouts for a creative partner: Could be more than one brand involved 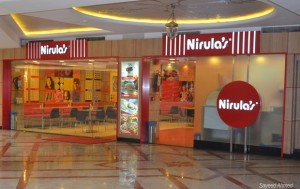 Steve’s breakdown: Though they use the same brand name, the feel of each of their businesses are very different. That’s why this account might have more creative development involved.

DELHI, India: Nirula’s, one of the oldest fast-food restaurant chains in India having hotels, waiter service restaurants, family style restaurants, ice cream parlours and pastry shops, is on the lookout for a creative agency. The pitch is currently under process in Delhi and it is learnt that a few agencies have already presented to the client. Lowe Lintas is the incumbent on the account.

Though no official confirmations could be obtained at the time of filing this report, sources close to the development have confirmed the news to exchange4media. It is learnt that the presentations made to the client included digital strategy too. Nirula’s had handed over its creative duties to Lowe Lintas in April last year to handle the brand communication, strategic planning and brand launches for the group, which has been in an expansion mode for a while. Prior to that, Bates141 had handled the account for the group.

Various media reports reported the group’s plan of adding 50 new outlets this year in Tier II cities of India. June 2011 marked the group’s foray into new format in the casual dining space in the Capital targeting customers with more spending power. Media reports also stated that the company intends to grow internationally by the end of 2013.

For the record, Nirula’s is a well-known name in the hospitality industry, having set up its first outlet at Delhi’s Connaught Circus area way back in the 1940s. Nirula’s operates restaurants under the brand name Nirula’s, casual dining outlets called Nirula’s Potpourri and two hotels. The Group is present in over 75 locations across Delhi and NCR, Uttar Pradesh, Maharashtra, Madhya Pradesh, Uttarakhand, Haryana, Rajasthan and Punjab. Malaysia-based private equity player Navis Capital Partners also has a stake in the company.