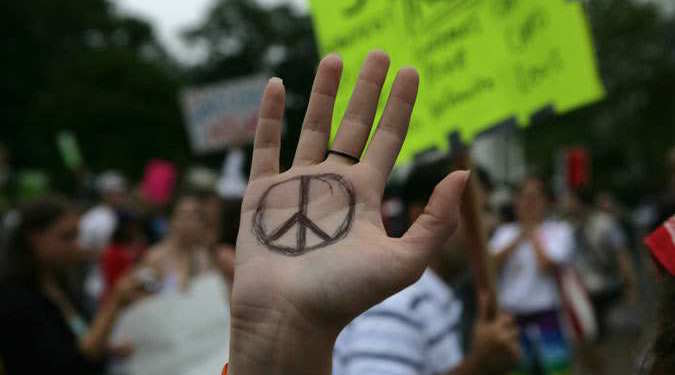 Steve’s breakdown: To answer your questions . . . yes this is real, yes this is unnecessary and yes, that idea your brain just burped up should be submitted to the contest!

This link takes you to the contest and the deadline for submissions is May 8th.

FRANKFURT, Germany: Coinciding with its upcoming group exhibition “PEACE,” which opens on July 1, the Schirn Kunsthalle in Frankfurt has launched an open call for a new peace logo.

The competition, which closes on May 8, is open to everyone and submissions can take the form of an image, logo, or a mix of the two.

“This summer, with our PEACE exhibition, the Schirn sets out to explore how peace actually works, a question that is as compelling as ever today,” said Philipp Demandt, director of the museum.

“Quite apart from this, we feel it is high time for a new peace logo. A logo for today that reflects our current notion of peace,” he added.

Could the winning design really replace the iconic peace sign? Designed in the 1950s, the popular symbol originated from the British campaign for nuclear disarmament, and was quickly adopted by anti-war and counterculture activists in the US and around the world.

Starting the peace sign “revolution” on a smaller scale, the winning entry—which will be determined by an independent jury of five—will be used in media advertising for the exhibition at Schirn, and the lucky designer will receive a €1,000 cash prize.

In addition, the top five logos will be featured in SCHIRN Magazine, while the ten finalists will be posted on the museum’s website, as part of an online competition for the “Audience Prize” winner.

The show, curated by Matthias Ulrich, takes a humanist perspective on peace, focusing on the interaction and communication around human co-existence through language, culture, and nature.