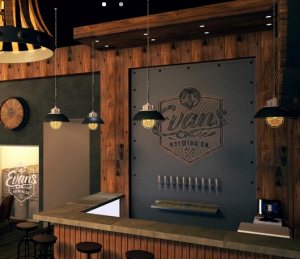 Steve’s breakdown: It’s a little confusing but here we go. Evan and Mike Rapport, a father and son team, took over Bayhawk and are the contacts for this account. Everything Bayhawk will be rebranded Evans. Both companies have award winning beers and we suspect they will be planning on expanding their market.

IRVINE, CA: Orange County’s oldest brewery is getting a facelift.

Irvine-based Bayhawk Ales Inc. will rebrand itself as Evans Brewing Co. two years after losing a proxy fight that handed its management over to the founders of Evans.

Bayhawk Ales, a public company, began in 1994 by producing house-branded beers for restaurants. It operated out of a brewery adjacent to McCormick & Schmick’s Main Street restaurant in Irvine.

Since the Bayhawk name was not attached to the preponderance of ales and lagers it produced, the brand wasn’t able to reap the benefits of the craft beer boom in 2011. Its name languished in relative obscurity.

In 2013, Evan and Mike Rapport, a father and son team from Yorba Linda, approached Bayhawk with an offer to lift Bayhawk out of obscurity. They had founded Evans Brewing Co. in 2011, and after winning multiple awards for their lagers the following year, they wanted a brick-and-mortar brewery.

At the time, they were contract brewing from satellite locations despite remaining headquartered in the area – a situation Evan, the son, was not happy with in terms of distribution or quality control.

They proposed merging with Bayhawk so they could use its premises, in exchange for endowing the Bayhawk brand with their award-winning name.

After being rebuffed by Bayhawk’s management, the Rapports initiated a hostile takeover that culminated with their purchase of 100 shares of the company. Bayhawk shareholders voted in the Rapports to lead the company’s new board of directors. Evan became president and brewmaster; Mike was named chairman.

The move not only gave Evans Brewing a brick-and-mortar location in the county. It also gave it ease of retail and market distribution.

The house-branded beers that Bayhawk sold to restaurants will continue to be produced under those restaurants’ names, but all Bayhawk-branded products will begin to carry the Evans Brewing label within the next few months.

A fire at the Irvine brewery in 2014 set back the Rapports’ plans for expansion, but Evans has since refurbished the Irvine location and is now considering a move into a bigger production facility in Orange County, as well as opening a tasting room.

In 2015, Evans’ Honey Blonde and Imperial Brown ales won gold medals at the Los Angeles International Beer Competition, while its Chocolate Porter garnered a bronze. The company has won a total of 16 awards both domestic and internationally.

The company is also moving forward with filings to allow its shares be traded publicly once again.