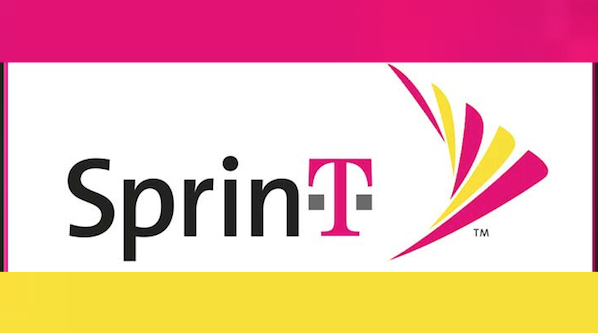 Steve’s breakdown: How about that for some design work? Huh? Not bad for a new business guy!

Some questions? What makes me think Sprint’s current “Sprintern” campaign is being done in house? Why is Droga5 working with both clients? Is this really just a T-Mobile takeover of Sprint?

I’m sure will learn more soon but you should probably start making friends on both sides cause this thing is going to blow-up.

BELLEVUE, WA & OVERLAND PARK, KS: There seemed no love lost between Sprint Corp.’s Marcelo Claure and T-Mobile‘s John Legere, a pair of chief executives who sniped at each other incessantly — on Twitter, at public events, even in ads. But behind the scenes, the two telecom moguls were bonding around a common cause.

The fruits of that relationship became apparent this weekend, when T-Mobile US Inc. agreed to acquire Sprint Corp. for $26.5 billion. Just months after a previous attempt collapsed under regulatory concerns, Legere and Claure have again driven the No. 3 and No. 4 American carriers together, realizing neither alone can outgun Verizon Communications Inc. and AT&T Inc. in the coming era of blazing-fast fifth-generation wireless.

The deal follows years of back and forth between Deutsche Telekom AG, the German company that controls T-Mobile, and SoftBank Group Corp., Sprint’s Japanese owner. But it was only in the past month or so that Claure really intensified his lobbying, calling SoftBank Chairman Masayoshi Son several times a week to reinforce the urgency of an alliance to take on the industry leaders, according to people familiar with the matter. Legere, meanwhile, worked on convincing Deutsche to come back to the table, the people said, asking not to be identified discussing the details.

The question now is whether antitrust enforcers will go along with the deal. Investors seem skeptical. They sent shares of Sprint down 13 percent to $5.63 on Monday, an unusual outcome for a company that just signed a takeover agreement. T-Mobile also dropped, declining as much as 5.9 percent to $60.72.

Legere said he was confident the transaction will be approved and that he has some convincing to do in Washington. “This magenta T-shirt and these sneakers are going to be in the White House, in the DOJ this week,” Legere said on CNBC, outlining his plans to defend the deal and impress lawmakers that the combination will stimulate investment on new networks.

China is now racing ahead on 5G research and investment and the sense was that the Trump administration, distrustful of the Asian power, would be more inclined to green-light a deal than its predecessor, the people said. The market dynamics were also changing: Comcast Corp. was steadily gaining broadband users while other cable operators hovered on the margins. With Legere on board — the two CEOs had begun meeting in person and speaking regularly by phone — the scene was set for the largest telecom merger in years.

“We share a common vision on how the network will be built and we realized we need each other to be mega-successful,” Claure said in an interview over the weekend. “We can’t build a 5G network without T-Mobile and T-Mobile can’t build it without Sprint.”

The new corporation certainly carries a lot more financial heft — crucial if it’s to remain competitive in costly 5G infrastructure development. Operating as T-Mobile, it would have about $74 billion in annual revenue and 70 million wireless subscribers. That’s within shooting distance of Verizon’s $88 billion in 2017 wireless revenue and 111 million subscribers, and AT&T’s $71 billion and 78 million.

Under terms of the deal, Deutsche Telekom will end up with a 42 percent ownership stake while SoftBank will have 27 percent. T-Mobile’s Mike Sievert will be president and chief operating officer. The German company’s chairman, Tim Hoettges, will serve in that role at the combined company while Legere becomes CEO, and the board will include Claure and Son.

But it’s Claure and Legere that proved pivotal to resuscitating a deal: The two men had grown increasingly certain they shared the same vision of 5G as the future, the people familiar with the matter said.

“In some fashion the kernel of the thought of why these companies should come together never left either of us,” Legere said in an interview. “This time around I think the realization started with Marcelo and it was more 5G driven.”

It remains far from certain however if Washington will green-light the deal — the third time that Son has tried to bring the companies together. Previous negotiations broke down also because the two sides couldn’t agree on control of the combined entity, people familiar with the matter said at the time. They’d dashed a plan to merge as far back as 2014 after meeting resistance in Washington. Regulators said then that four major competitors in wireless fosters more choice, price competition and innovation — which proved to be largely true.

Sprint and T-Mobile will try to convince regulators that new entrants such as Comcast mean more competition, not less. Claure told analysts on a conference call that Comcast was now adding more wireless users on a net basis than AT&T and Verizon — combined. The two carriers will thus argue a combination will spur bigger investments in 5G and put pressure on larger rivals, even if the consumer benefits aren’t immediately obvious.

“If Trump wants to see national 5G and the investment with it, then I think the administration can spin a story to support this,” said Chris Lane, a Hong Kong-based analyst at Sanford C. Bernstein.

For Sprint, which hasn’t had a profitable year in more than a decade, the merger is a bailout. The company is four years into a go-for-broke turnaround effort launched when Claure took over and started slashing prices to stop customer losses. And growth at T-Mobile — one of the more remarkable industry success stories of the past decade — is slowing.

“This deal is a great example of what we will see more of in the telecoms space. If you look at the capex that will be required as a result of 5G build-out, you need to create more economies of scale,” Steve Krouskos, Ernst & Young‘s global vice chairman of transaction advisory services, told Bloomberg Television. “This particular deal will create a strong third player in the U.S. market.”