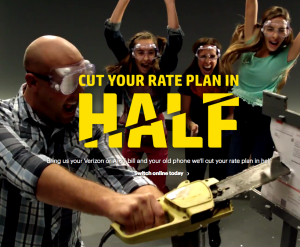 Steve’s breakdown: This is a big deal because of the RadioShack deal. Let’s keep an eye on this new guy.

In his new role, Crull will be responsible for all products and services, brand and advertising, customer acquisition and retention, and all digital and social efforts. Crull will report to President and CEO Marcelo Claure.

Crull will be a vital contributor to Sprint’s leadership team, charged with attracting new customers and advancing the company’s push for greater innovation.

“Kevin did an amazing job at Bell Media and I expect him to do even better at Sprint,” said Claure. “Sprint is privileged to attract someone of his caliber and experience in media, content, and wireless. As the industry shifts towards providing unique experiences and content to wireless customers, Kevin’s exceptional experience will allow him to be a great contributor in Sprint’s transformation journey.”

Crull brings to Sprint 30 years of experience leading sales, marketing and operations teams. Most recently, Crull served nearly five years as chief operating officer and then president of Bell Media, Canada’s largest media and broadcasting company. At Bell, Crull led the acquisition of CTV Globemedia in late 2010, creating the foundation for Bell Media, Inc. Following that he led the acquisition and integration of Astral Media in 2012 and 2013. Under Crull, CTV, Bell Media’s flagship broadcast network, boasted four of the top five Canadian-produced television programs and 14 of the top 20 programs over all, delivering consistent ratings growth in an intensely competitive market.

“I’m thrilled to join Sprint, a company that I believe has limitless potential for growth and transformation at a very exciting time in the industry,” Crull said. “I believe the Sprint team is showing great momentum and has a plan to win in the marketplace. The wireless industry offers tremendous opportunity for profitable growth. My past experience has been all about execution and transformation and delivering results, and this is what I intend to do as part of the Sprint team.”

Before his time with Bell and its affiliated companies, Crull led consumer and small-business sales and marketing at AT&T Corp., and was senior vice president and general manager of AT&T’s wireless initiatives. Crull’s telecommunications experience includes nearly five years as an executive at US West/Qwest Communications, where he was a senior vice president leading the company’s largest business unit.

At the outset of his career, Crull rose from entry-level to the executive suite during nine years at Nestle USA.

Throughout his career, Crull has focused his efforts on growing businesses by developing keen insights into what consumers need and want, and devising business programs to deliver it.

Sprint will benefit from this philosophy as the company grows and attracts more subscribers from rival wireless providers.

Crull will relocate to Kansas City with his family.

Sprint S, -0.63% is a communications services company that creates more and better ways to connect its customers to the things they care about most. Sprint served more than 57 million connections as of March 31, 2015 and is widely recognized for developing, engineering and deploying innovative technologies, including the first wireless 4G service from a national carrier in the United States; leading no-contract brands including Virgin Mobile USA, Boost Mobile, and Assurance Wireless; instant national and international push-to-talk capabilities; and a global Tier 1 Internet backbone. Sprint has been named to the Dow Jones Sustainability Index (DJSI) North America for the past four years. You can learn more and visit Sprint at www.sprint.com or www.facebook.com/sprint and www.twitter.com/sprint.