Entire town to turn into resort with no marketing plan

Home Industry: DestinationEntire town to turn into resort with no marketing plan

Entire town to turn into resort with no marketing plan

Steve’s breakdown: You probably read about how a family put the entire town of Tiller, Oregon up for sale. Well, there is now a new owner and they could probably use some expertise leveraging and continuing their social media viral-ness.

There’s a 47 picture gallery at this link.

TILLER, OR: It’s not easy to acquire, then sell, an entire town. But the Caswell family pulled it off by slowly buying land as it went up for sale in a declining timber town in southern Oregon.

Without a grand plan and over three decades, they came to own most of tiny Tiller, then, after their parents died, the heirs put their acres up for sale and offers, and worldwide attention, poured in.

On Sept. 10, the family announced that new owners took title to Tiller, from the riverfront houses and dusty downtown with a closed school and store, to forested hilltops with water and timber rights.

The asking price of $3.85 million bundled together 257 contiguous acres and all but a few Tiller tax lots.

Not for sale were the community church and pastor’s residence, the volunteer-staffed fire station and a retired school teacher’s house.

But pretty much everything else was on the market, including a potential housing subdivision and the land underneath the post office, which opened in 1902.

The new owners hope to create a tree-laden river resort open to the public in the verdant, remote and mostly unoccupied setting on the South Umpqua River, about 225 miles south of Portland.

The buyers say they have no interest in logging, growing or selling cannabis, operating a rehab center or nudist colony or a re-creation of an old town like Knott’s Berry Farm amusement park’s Calico Ghost Town.

The new owners, who want to remain anonymous for now and have not disclosed the sale price, describe the ambitious plan like a Shangri-La: The forests will be maintained, people will be hired, local products will be sold and forward-thinking experts will work on crucial social issues such as creating “healthy homes” and relying on biofuel public transportation while vacationers hike trails and ride ziplines over the water.

“With pleasure, I’d like to let you know our Tiller transaction recorded and closed,” said Richard (“Rick”) Caswell, Jr., who represents his family’s trust. “I can’t believe it finally came together.”

The complicated sale was handled in two phases.

The Caswells were asking $3.5 million for the land and the boarded-up Tiller general store, with a deli, commercial kitchen, gas pump and apartment.

In a separate transaction that closed May 22, the South Umpqua School District received $350,000 for its 6.58 acres and the expanded Tiller elementary school, which started in the late 1800s as a one-room schoolhouse. The 16,588-square-foot building has been closed for years.

When the new owners visited the school after it sold, they found someone had left flowers near the entrance with a note welcoming them, according to broker Garrett Zoller of Medford-based Land and Wildlife Realty, who agreed to take on the Caswells’ attention-getting listing in 2015.

Once the school contract was signed in 2016, making it possible to sell almost the entire town, the story went viral. The dot on the Oregon map become a captivating story for CBS and the BBC, Time and Fortune magazines, tree-hugging Mother Nature Network and the climate-change challenging Drudge Report.

Men and women who had never been to the Pacific Northwest fell in love with the idea and ideal of Tiller. They referred to it by name as if it were their hometown. They offered to volunteer to nurture its rebirth; to reignite the workshops, restock grocery store shelves, reopen the school.

The listing didn’t just represent what’s there — ramshackle buildings that you can drive pass in about three minutes on the way to the Seven Feathers casino in Canyonville or Crater Lake National Park in the other direction — but what could be: The opportunity to purchase a slice of the American dream in Douglas County.

“What happens to the property is going to be determined by what I call the imagination of the buyers and the limitations of the bankroll,” said Caswell in 2017, who pointed to a map that shows Umpqua National Forest and Bureau of Land Management acres dwarfing the modest homes and other weather-beaten structures that make up the town.

The new owners “will determine what becomes of Tiller,” he said.

Longtime residents have seen jobs move from trapping, mining, logging and a ranching economy to nothing. The land was ignored or underused for years.

Like a giant jigsaw puzzle, the Caswell family pieced together land as it went up for sale in a declining southern Oregon timber town. Without a grand plan and over three decades, they came to own tiny Tiller, a remote, unknown and mostly unoccupied pinpoint on the map. Then they put it all up for sale and offers, and worldwide attention, poured in.

The borrower defaulted on the loan and the property reverted to the lender, Caswell Sr.

Rick Caswell felt bad the deal didn’t stick and offered to find a new buyer, but his dad liked the area off Oregon Route 227 just past the river-rafting spots around Shady Cove.

The first purchase was part of pioneer Aaron J. Tiller’s original homestead. There were fruit trees and an apple orchard. “It was park-like,” said Rick Caswell, “beautiful.”

The deed also included property across the Tiller Trail Highway, at the east entrance of town.

Here, on three shady acres, zoned for commercial use, were two beat-up barracks and a deck that hung over the river.

Rick’s dad decided these could be the family’s vacation homes. Looking across the river from his deck, he saw a forest that was prime to be cut. He bought the 100 acres to save the view.

Today, the Caswells’ former land has about 2 million board feet of merchantable timber.

When the timber industry collapsed in the early 1990s, the mills closed, much of Tiller’s population moved away and the family bought properties that were for sale.

Eventually, 28 lots were knitted together like a giant quilt.

The Caswells acquired the last piece in 2004. In 2014, after 64 years of marriage, Caswell’s dad and mom, Barbara, died within months of each other. Their ashes were scattered on the river that flowed by their Tiller home.

Then Caswell and his three sisters, two of whom had lived in Tiller, decided to put the sleepy town up for sale. They worked with the owner of the grocery store and the school district to market the entire package together.

Zoller of Land and Wildlife Realty said the deal was difficult because of the assorted tax lots and other hurdles, but “both the sellers and buyers were extremely cooperative and positive, and we chipped away at it to make it work.” 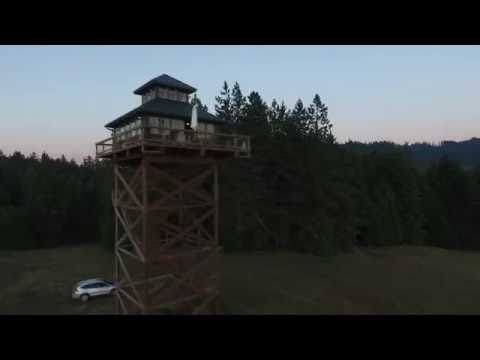 If you can’t afford $3.85 million to buy tiny Tiller, Oregon, but still crave a taste of this verdant Shangri-La, you can rent a replica of a fire lookout tower high in the mountains above the now-famous former timber town.

Tiller resident Angela Hunt has had a front-row view of the changes. She and her late husband bought their home near the school more than 40 years ago. She was a teacher there and he worked for the Tiller Ranger District.

Her son, Pete Hunt, said that although it’s been disappointing to see the school and other buildings fall into a state of disrepair, “everyone I talk to is optimistic about the sale.”

He and other residents hope the new owners will work with them to develop their venture, “whatever that may be.”

He added: “Tiller could certainly benefit from some positive energy and fresh thinking.”