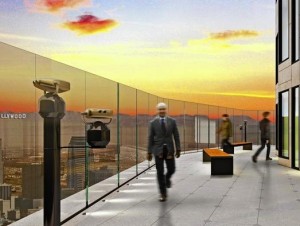 Steve’s breakdown: The deck will be called Skyspace L.A. and it will be the tallest in the west. These attraction make great clients so get in there now. The people running the deck are the same folks who run One World Observatory, Legends OWO, LLC.

LOS ANGELES, CA: The owner of U.S. Bank Tower in downtown Los Angeles — the tallest skyscraper in the West — is building an outdoor observation deck, bar and restaurant on the top floors, part of a $50-million makeover of the 72-story building.

The famous building, once packed with prestigious firms, fell on hard times in recent years and was almost half empty when it was bought in 2013. The new owner, Singapore-based Overseas Union Enterprises Ltd., is now detailing planned improvements.

Built in the late 1980s as an exclusive corporate cathedral, the round, crown-topped tower faces fresh competition for tenants from recently renovated historic buildings popular with young Internet companies and other creative businesses. Beyond keeping the building competitive, OUE aims to profit by charging tourists admission.

Dubbed Skyspace L.A., the rooftop complex will be one of only a handful of such high-altitude visitor venues in the country. It will be operated by the firm that runs the observatory at the new One World Trade Center building in New York.

The numbers could add up for landlord OUE, said Dave Kerschner, president of attractions at Legends, the entertainment service company that will operate the site. Legends is owned by the Dallas Cowboys and New York Yankees.

“I think highest and best use of space in that building easily is an observatory,” he said. “It makes sense from a business standpoint.”

U.S. Bank Tower is shorter than the tallest buildings in Chicago and Manhattan, but high enough to allow views into Glendale and the San Fernando Valley, as well as to Santa Catalina Island.

“I am sure that we are the only destination that will offer 360-degree views of L.A.,” said Lucy Rumantir, chief operating officer of OUE in the Americas.

So why didn’t the original owners include public spaces at the top when it was built?

The developers were focused on serving elite corporate clients, who may or may not have favored sharing the top of the building with tourists.

“It never occurred to us that it was viable, because we were focused on our rent-paying tenants,” said Nelson Rising, who was in charge of developing the property for original owners Maguire Thomas Partners.

U.S. Bank Tower
The 1.4-million-square-foot building, originally called the Library Tower, was 82% leased before Maguire Thomas broke ground for construction, he said. The complex of towers on Bunker Hill were highly sought by business tenants in the 1980s and 1990s, when most blocks outside downtown’s office core were considered undesirable or even dangerous.

Today, the U.S. Bank building and other high-rises from the same era have a harder time distinguishing themselves.

Fast-growing tech and entertainment firms popularized the elaborate renovation of former factories and other older buildings into what has became known as “creative” office space. Now lawyers and other professionals who once demanded buttoned-down offices are looking for hipper alternatives.

U.S. Bank Tower also lost some of its competitive edge when previous owners MPG Office Trust Inc. fell on hard times after the recession. With demand for rental space shrinking, MPG lacked funds to maintain the property and build out new offices for prospective tenants.

Under new ownership, however, the building is now more than 80% leased, according to OUE.

The sky-high restaurant on the 71st floor will be called 71Above and be operated by Los Angeles chef Vartan Abgaryan, currently executive chef at Cliff’s Edge restaurant in Silver Lake. It is set to open in the first quarter of next year. The 72nd floor will continue to be leased to office tenants.

The observation decks, along with space that can be rented for special events including weddings, will incorporate floors 69 and 70. .

The addition of glassed-in platforms won’t significantly change the lines of the original building design by the New York firm of star architect I.M. Pei, OUE said.
The company plans to open the observation deck by the middle of next year and keep it open daily from 9 a.m. to midnight.

Visitors will enter Skyspace L.A. through a new entrance to the building off of a flight of stairs on the west side that were designed to evoke the monumental Spanish Steps in Rome. A coffee bar will be eliminated to create the entrance and make room for ticketing operations and a souvenir shop. The building’s elevators have been upgraded to help move passengers more efficiently.

Downtown supporters hope Skyspace will have a ripple effect on the central business district.

“OUE has seen the long-term benefit of using this iconic building to do something that not only makes business sense but will become an economic driver for downtown,” business consultant Hal Bastian said. “It will put heads in beds and people in our restaurants.”

OUE will have high-altitude company downtown in the 73-story-tall Wilshire Grand hotel and office building set for completion in 2017. Its 70th floor will have an outdoor bar and observation deck.

OUE will also make substantial improvements to the lower public floors of U.S. Bank Tower. The McCormick & Schmick’s restaurant that had been a fixture since the building opened in 1989 has been closed to make way for Monkee, a Cantonese restaurant set to open by the end of this year.

Another noteworthy change will take place on the first floor, where OUE will fill a wall of the lobby with a video screen 126 feet wide by 17 feet high. OUE will show images intended to entice passersby to come in.

“The content will capture the essence of L.A.; the people, the scenery, the celebrity,” OUE’s Rumantir said. “We are selling L.A.”