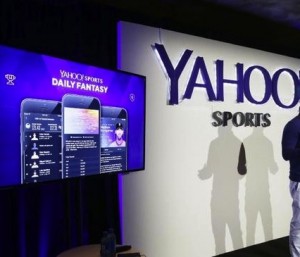 Steve’s breakdown: We might have a better idea why DraftKings put their account in review. Here’s comes Yahoo with Daily Fantasy! No word on who’s doing the advertising so it’s a good time to check it out.

The Silicon Valley giant announced this week that it launched Yahoo Sports Daily Fantasy, a betting service that could introduce tens of millions of people to legalized online sports gambling.

The service, available through a mobile app, allows users to compete in groups or individually by betting on a professional athlete’s performance.

Daily fantasy games will generate about $2.6 billion this year in entry fees, an industry euphemism for wagers, growing 41% annually to an estimated $14.4 billion by 2020, according to Eilers Research in Anaheim.

Led by sites such as DraftKings and FanDuel, fantasy sports betting has blossomed since 2006, when the federal government enacted the Unlawful Internet Gambling Enforcement Act.

The law distinguished gambling on fantasy sports as a game of skill rather than chance like, say, online poker, making it fully legal in all states except Arizona, Louisiana, Iowa, Montana and Washington where local laws ban such betting.

Ken Fuchs, Yahoo’s vice president of products, said the move, announced Wednesday, will allow the Sunnyvale, Calif., company to expand its presence on mobile devices, draw in the 18- to 34-year-old demographic and create a base of steady transactional revenues by taking 10% of each wager.

The fantasy league betting fits in with wider ambitions: Yahoo is aiming to become a presence in professional sports. Eyebrows were raised in June when Yahoo announced that it gained exclusive NFL rights to broadcast the London contest between the Buffalo Bills and Jacksonville Jaguars in October.

Yahoo said it already has tens of millions of users signed up with its traditional fantasy sports, a service that’s been around for more than 16 years. Users spent 500 million hours on fantasy sports last year, the company said.

However, Adam Krejcik, managing director for Eilers Research, is disappointed that Yahoo’s daily fantasy platform is not much different from competitors’. He had hoped for innovations that would make the experience more shareable on social media or attractive to casual users of fantasy sports.

Krejcik said Yahoo would have to invest at least $100 million this year on the service to compete against the likes of DraftKings and FanDuel, two venture capital-backed start-ups with $1-billion valuations.

“[W]hile Yahoo certainly has the resources to spend at this level, it is unclear to us whether management is willing to commit to this type of cash burn,” Krejcik wrote to clients Thursday.

Fuchs declined to say how much the company would invest this year.
Yahoo’s foray into sports betting comes as its traditional advertising model continues to suffer. The vast bulk of Yahoo’s revenue comes from advertising, and for years it’s been flat.

The company’s first-quarter earnings of $1.04 billion fell just short of analyst expectations. Its shares have declined nearly 50% since November.

The company was late to the culture’s rapid switch to mobile technology and video advertising. Marrisa Mayer, the former Google executive who became Yahoo CEO in 2012, is attempting to light a fire under growth in mobile and video advertising. Although the banner advertising Yahoo specialized in is a fading business, global online video ads totaled $11.2 billion in 2011 and are expected to hit $13.5 billion by 2013, according to IHS Inc.

While she builds those businesses, she’s looking for other ways to juice sales growth. Sports betting fits into its transaction-based businesses alongside Yahoo Small Business, Yahoo Travel and Yahoo Shopping. The company doesn’t directly report revenue for those operations, but they represent a small part of the company’s overall sales. For a company in trouble, every new dollar helps.

“The problem is Yahoo is an older way of reaching customers,” Jackson said. “Their most profitable ads are PC-based, but more and more ad [dollars] are moving to mobile.”

It’s not all gloom, Jackson said. Yahoo still has a major advantage over its daily fantasy sports rivals in marketing the new product.

DraftKings and FanDuel “are spending every dollar they raise in VC money in advertising to attract new users,” Jackson said. “Their cost of accruing new customers is extremely high whereas Yahoo doesn’t even have to do any TV advertising. They basically just have to put up a banner on all Yahoo pages. So they could have the same growth, but much different costs.”

Entry fees for Yahoo’s daily fantasy cost as much as $500, though many games are free or cost just a few dollars. Prizes vary based on the contest. The biggest payout Thursday was $10,000 for a baseball contest.

Players can deposit up to $600 a day using PayPal or a credit card.

Fuchs said Yahoo would monitor accounts for huge swings in cash to prevent fraud or abuse.

“We encourage people to play responsibly,” he said.