Circling the wagons at Nike 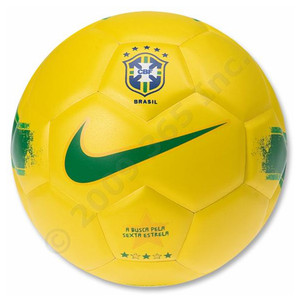 Steve’s breakdown: Here’s your headline: Nike becomes suspected player in alleged $150 million FIFA bribery scandal. If this is true, public perception needs to be managed cause this thing is not going away anytime soon.

It’s a very complicated situation but it involves The Brazil national football team and a $34 million marketing deal.

BEAVERTON, OR: The international investigation into bribery, fraud and corruption at FIFA involved some surprising American names: The Miami chairman of a popular nationwide soccer league, and a major U.S. sportswear firm some believe could be Nike.

For more than two decades, the Justice Department said Wednesday, five “unscrupulous” U.S. and South American sports and banking executives helped funnel more than $150 million in bribes to officials atop FIFA, the multibillion-dollar goliath governing the world’s most popular sport.

The indictment also alleges bribes were paid and pocketed in connection with the sponsorship of the Brazilian national soccer team by “a major U.S. sportswear company.” Although investigators will not name the company, the indictment says the sportswear firm signed a 10-year, $160 million sponsorship deal with the Brazilian team in 1996, closely matching Nike’s clothes, shoes and equipment deal with the team that year.

The indictment alleges a sportswear-company official agreed three days later to allow Traffic Brazil, a sports marketing company, to charge additional “marketing fees.” Traffic then invoiced the company for tens of millions of dollars more in payments over the next three years that investigators say were bribes.

[U.S.: Indictments are just the start of FIFA scrutiny]

Nike’s current contract, which expires in 2018, includes $34 million a year in payments to the team, the fourth-largest uniform deal in international soccer, and the Oregon-based mega-firm’s Swoosh logo sits on every Brazilian player’s outfit.

The Brazilian sponsorship deal helped transform Nike from a brand mostly known for running and basketball shoes into a global sports giant. Nike’s soccer revenue surpassed $2.2 billion in fiscal year 2014, up from $40 million in 1994.

A Nike representative said in a statement that the firm is “concerned by the very serious allegations … and strongly opposes any form of manipulation or bribery,” adding that the company is cooperating with the authorities.

Nike investors seemed to shrug off the issue, sending the $88 billion giant’s stock falling less than 1 percent. Even if Nike was implicated, analysts expected it would have minimal impact on the Big Swoosh.

“What fans or consumers are going to be much more concerned about is doping of athletes, fixing of matches, that kind of thing,” said Matt Powell, a sports industry analyst for NPD Group. “I think they couldn’t care less who paid whom for what marketing deal.”

[The human toll of FIFA’s corruption]

The broader corruption charges allege the five U.S. and South American businessmen pocketed kickbacks in exchange for media rights and marketing deals tied to some of soccer’s most profitable games.

Besides the nine FIFA officials, sports-marketing executives Alejandro Burzaco, Aaron Davidson, Hugo Jinkis and Mariano Jinkis were indicted on charges of racketeering, wire fraud, money laundering conspiracy and a host of other charges tied to years of “rampant, systemic and deep-rooted” corruption, as Attorney General Loretta E. Lynch called them.

The executives are accused of serving as middlemen between FIFA and its six continental confederations, who make most of their money selling media and marketing rights to popular matches, and the legion of TV and radio networks, corporate sponsors and other licensees, who want to broadcast the games or promote their brands.

By bribing corrupt FIFA officials with more than $150 million since 1991, the Justice Department said, the marketing executives secured themselves lucrative multiyear contracts.

About $4 billion of FIFA’s $5.7 billion in revenue between 2011 and 2014 came from contracts for TV and marketing rights for the 2014 World Cup, the Justice Department said.

Burzaco, 50, is the chief executive of Torneos y Competencias S.A. (Tournaments and Competitions), an Argentinean sports broadcast firm that runs pay-TV channels, such as TyC Sports, and owns the rights to air key soccer matches, including World Cup qualifiers.

Hugo Jinkis, 70, and his son Mariano Jinkis, 40, were the president and vice president of Full Play Group S.A., an Argentinean sports-marketing agency that holds the TV rights to many South American games.

José Margulies, 75, the controlling principal of Valente Corp. and Somerton Ltd., was also accused of helping coordinate the illegal payments between the executives and officials.

The lone American executive charged so far is Aaron Davidson, 44, the president of Traffic Sports USA, a Miami-based arm of the Traffic Group, a Brazilian sports marketing conglomerate.

Davidson is chairman of the board of the North American Soccer League (NASL), and Traffic Sports USA owns stakes in several of its regional soccer franchises, including the Atlanta Silverbacks and the Carolina RailHawks, and a former stake in the Fort Lauderdale Strikers.

Davidson spoke for the company in media interviews as recently as last week’s Sport Innovation Summit in Mexico City.

In 2012, the company won a massive marketing contract with FIFA to manage two mega-popular soccer tournaments for the U.S.-based soccer confederation, CONCACAF: the 2013 Gold Cup and 2015 Champions League.

Davidson said at the time that the company was “honored to have been selected by CONCACAF to represent these prestigious competitions,” and added that “being based in South Florida over the past 21 years has been very strategic and advantageous for us.”

How firms like the Traffic Group allegedly kept bribes pumping play out over the court records of José Hawilla, the firm’s 71-year-old Brazilian founder. In December, Hawilla pleaded guilty to charges including racketeering conspiracy, money laundering conspiracy and obstruction of justice, agreeing to forfeit more than $151 million, including $25 million on the spot.

Founded in Sao Paulo in 1980, the privately held Traffic Group focused on the “commercialization of soccer” through buying and selling media rights such as field branding, sponsorship deals and licensed merchandise. In a 2011 lawsuit, Traffic Sports International described itself as “one of the leading sports event and management companies in the world.”

Traffic International funneled bribes extensively, investigators said: In five payments starting in 2010, for rights tied to the 2011 Copa America, the firm wired $22 million that bounced between a Miami bank, a Banco de Brasil in New York, and an account in Asuncion, Paraguay.

The executives found a profitable playground in FIFA, which holds more than $1.5 billion in cash reserves. The organization pockets about $1.4 billion from its six official corporate sponsors every four years, with Adidas, Coca-Cola, Hyundai/Kia Motors, Emirates, Sony and Visa pledged as partners for the most recent World Cup.

Made up of 209 regional member associations that represent organized soccer, FIFA is both financially opaque, cloaking much of its spending and executive salaries, and tremendously profitable.

Between 2007 and 2010, when FIFA made 83 percent of its more than $4 billion in revenues off selling TV and marketing rights to the 2010 World Cup, its profits totaled about $631 million, income statements show.

FIFA, or the Fédération Internationale de Football Association, called itself the “injured party” in the investigation and said it “welcomes actions that can help contribute to rooting out any wrongdoing in football,” a statement released Wednesday said.

Jack Warner, a former FIFA vice president and soccer official from Trinidad and Tobago charged in the U.S. case, said in a statement to the Daily Mail in London that the investigation hid economic motives.