Home Blood in the WaterJust Fix It! . . is what I’d say to this iconic brand 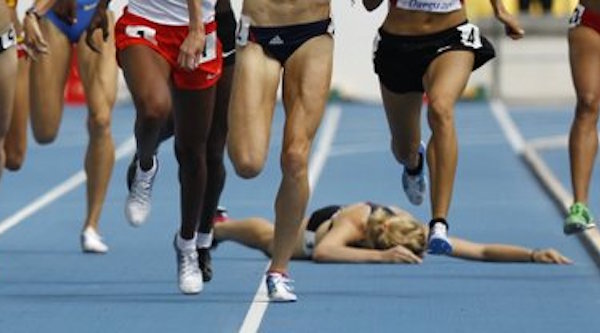 Steve’s breakdown: Diversity problems and misconduct allegations are plaguing Nike and they need to decide what to do about this before the teenagers of this country decide for them.

Dealing with it in a upfront and sincere manner will help and sometimes only fresh eyes will make that happen. That’s your Monday Cue!

BEAVERTON, OR: Greg Thompson, Nike‘s vice president of footwear, left the company on Wednesday, according to Reuters, making him the fourth executive to leave the company in a little over a month. No further details were given on the reason for his departure, though it comes at a time when the company’s corporate culture and conduct are under scrutiny. Nike did not immediately respond to Retail Dive’s request for comment.

The departure of Antoine Andrews is just the third in a series of misconduct and diversity issues that have plagued Nike over the past month. Both Trevor Edwards, Nike’s brand president, and Jayme Martin, vice president and general manager of global categories, stepped down over misconduct allegations last month.

The timing is never perfect, but it comes at a particularly bad moment for Nike, as the brand recently announced new efforts to reach out to the female market, which has not been a strong suit for other sports retailers in the past. In addition, while the company remains the top sportswear brand for teenagers, Adidas is gaining market share to Nike’s detriment — and executive shake ups are not likely to help Nike get back on track.

While CEO Mark Parker did acknowledge the leadership changes in March, saying that behavioral issues were “inconsistent with Nike’s values of inclusivity, respect and empowerment,” Andrews’ departure throws another wrench in the company’s recovery at a time when consumers are increasingly mindful of brand behavior. Indeed, 48% of shoppers think it’s important for retailers to take a stand on gender equality issues and will make purchase decisions based on retailer behavior.

Nike is not the only sportswear company facing diversity hurdles. Lululemon CEO Laurent Potdevin resigned back in February over conduct allegations, throwing the female-focused brand into an identity crisis of sorts, as the retailer is left to heal trust and brand perception.

There’s no doubt the athleisure market is big enough to support minor missteps, but a failure to address diversity and inclusion could harm sportswear brands in more than just sales, especially for Nike, which in the past has prided itself on equality.