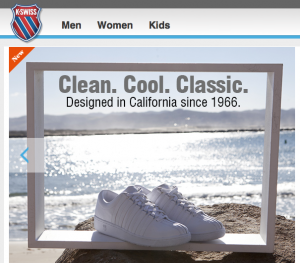 Steve’s breakdown: K•Swiss buying this Korean fashion monster is a great opportunity for any agency who wants to get into the biz.

WESTLAKE VILLAGE, CA: K•Swiss Inc. announced that, at a special meeting of stockholders held earlier today, its stockholders approved the adoption of the Agreement and Plan of Merger, dated January 16, 2013, by and among K•Swiss Inc., E.Land World Limited, a corporation organized under the laws of the Republic of Korea, and Ian Acquisition Sub, Inc., a Delaware corporation and an indirect wholly-owned subsidiary of E.Land (“Merger Sub”), pursuant to which Merger Sub will be merged with and into K•Swiss, with K•Swiss surviving as an indirect wholly-owned subsidiary of E.Land.

Approximately 94.6% of the voting power of the Company voted in favor of the adoption of the Merger Agreement. The affirmative vote of 80% of the aggregate number of votes eligible to be cast by the holders of K•Swiss’ Class A common stock and Class B common stock, voting together as a single class, at the special meeting, was required to adopt and approve the Merger Agreement. K•Swiss’ stockholders, also approved at the special meeting, on an advisory, non-binding basis, compensation that may become payable to the Company’s named executive officers as a result of the merger.

K•Swiss currently anticipates closing the merger on or about April 30, 2013, subject to the satisfaction or waiver of the other previously disclosed closing conditions.

Founded more than forty years ago in Van Nuys, California, K•Swiss introduced the first all-leather tennis shoe, the K•Swiss “Classic” in 1966. Since its inception, K•Swiss has rooted itself in California Sport with an aim to be the most inspiring and innovative sports brand in the market. Today the Company offers performance and lifestyle footwear and apparel for several categories under its California Sports umbrella including Tennis Heritage, California Fit (Running, Triathlon and Fitness) and California Youth. K•Swiss also designs, develops and markets footwear under the Palladium brand. For more information about K•Swiss, visit www.kswiss.com.