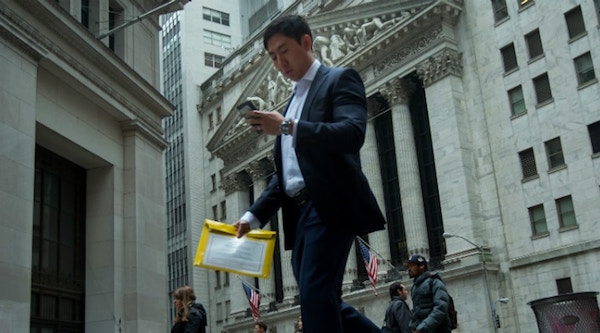 Steve’s breakdown: The dog is Bloomberg and the product he’s launching is Enterprise IB to go head to head with Symphony. Not a great name but he’s got the bucks to make a run at the competition. No word on who’s doing the advertising.

NEW YOIRK, NY: Competition in the financial information space is heating up after Bloomberg drastically reduced the pricing of its messaging tool subscription. The move is a direct result of rival, Symphony’s creeping competition in the area, which had been making inroads with its own workflow platform and network.

Bloomberg has been a key player the messaging space for years, helped by the backing of big names on Wall Street. The group has always instituted a rigid pricing for its services suite. Presently, this amounts to $22,000 for a bulk deal of data and messaging services for a two-year term, per an FT report.

However, in a bid to undercut Symphony, the group will be unbundling this core services package to offer a standalone chat service for as little as $10 a month per user. The development follows after the rollout of Bloomberg’s Enterprise IB, which was made available to select customers in 2017.

Enterprise IB was already slated to be deployed on a broader basis by the end of 2017, though a chat-only service at such a low price could be a game-changer. Indeed, the move helps answer Symphony, which has inked several agreements and initiatives of its own over the past year with other big name Wall Street venues.

Bloomberg’s $10 monthly fee for a chat service is approximately half of Symphony’s current communication tools offering, which stands at $20 a month. Since launching the service two years ago, Symphony has accrued nearly 235,000 paid subscribers, many of which at leading Wall Street banks.

Citing the report, only 118,000 of these accounts are designated as active, meaning Bloomberg has latitude to perhaps poach certain clients away from Symphony as well as plant its own flag amongst the budget messaging crowd. “This is a standalone product that services the internal communications needs of our clients,” noted a Bloomberg spokesperson.

By extension, Bloomberg’s terminal membership numbered 324,485 subscribers last year, though the number had incurred a year-over-year decline, according to Burton-Taylor International Consulting study. Regardless, Bloomberg terminal still is the massive leader of the data space, with a 33 per cent market share, relative to 23 percent for Thomson Reuters.

David Gurle, Chief Executive of Symphony deflected Bloomberg’s recent Enterprise IB rollout, who felt his company was winning more of the of key demographics within banks that had previously been undertaken by Bloomberg’s chat tool or other services.

Interestingly, Bloomberg’s new pricing structure could also herald a change of its existing data bundling offering as well. “They’re betting the whole system without chat is worth $21,900 a year. Is it? Maybe for some old bond traders, but for everyone else, I don’t think so,” questioned Morgan Downey, Chief Executive of money.net, a data service that offers Symphony Chat.