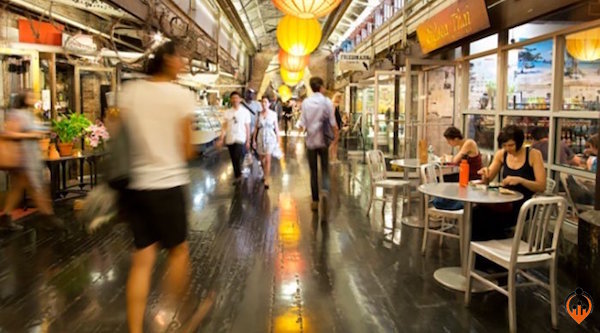 And they are going to be everywhere. In fact one opened up here on the boardwalk here in Asbury Park last year. What these food halls aren’t doing right is Advertising. Or maybe it’s that the local ad agencies who don’t know how to pitch the account.

Figure that out and you could have a couple of new clients pop up in your neighborhood.

EVERYWHERE, USA: Younger consumers who are driving curation trends at shopping centers desire variety and surprise in their dining choices, and that will cause the number of food halls in the U.S. and Canada to nearly triple in just the next few years.

This rapid growth trend, the report held, has been put in play primarily to suit the appetites of Millennials.

That generation savors inexpensive-but-high-quality dining options and spends 44% of its food dollars eating out, the report noted. Seeking variety, four out of 10 of them order something different every time they visit the same restaurant, making food halls a premier option. More than half of Millennials even prefer communal seating when eating out.

Food halls have an appeal to all age groups in that they can overwhelm the senses, said the report: “They are visually appealing, the aromas are enticing, and the spaces inviting. The vendors are global in nature, offering a wide range of variety and quality cuisines.”

Operating on a structured commercial real estate model requiring less startup capital than is needed for stand-alone restaurants, food halls encourage innovation. And while critics argue that the number of failed restaurants is on the rise, the report claimed that food halls are one of the contributing factors to that trend.

Google paid the second-highest price in history for a Manhattan building — its New York headquarters at 75 Ninth Avenue for $2.4 billion — in part to claim the 165,000-sq.-ft. Chelsea Market food hall on the ground floor, according to Cushman & Wakefield.