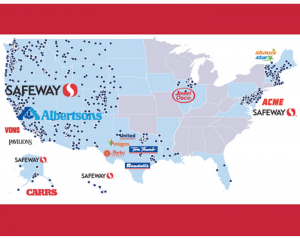 Steve’s breakdown: Albertsons has 18 store brands and they have big plans for all of them including their advertising.

They sound very regionally minded so that might be a good way in.

BOSIE, ID: Albertsons completed its acquisition of Safeway earlier this year to create a $57.5 billion company that now plans to return to public ownership with a major stock offering with implications for trading partners and competitors.

Albertsons became one of the nation’s largest food and drug retailers after completing its acquisition of Safeway in late January. The company now operates 2,205 stores with 1,698 pharmacies and 378 fuel centers in 33 states under 18 banners including Albertsons, Safeway, Vons, Jewel-Osco, Shaw’s, Acme, Tom Thumb, Randalls, United Supermarkets, Pavilions, Star Market and Carrs. Of the 121 major markets in which it operates the company claims to be ranked first or second in market share in 68% of them.

The company relies on what it says is a simply operating philosophy of running great stores with a relentless focus on sales growth. It contends there are significant opportunities to grow sales, enhance profits and generate free cash flow by further improving identical store sales, upgrading fresh, natural and organic offerings and expanding private label. Other aspects of the company’s strategy, which are identical to most other food retailers, involve driving growth by leveraging loyalty programs, capitalizing on demand of health and wellness services, upgrading its store portfolio, innovating and sharing best practices across its multiple divisions.

While many aspects of the company’s strategy sound familiar to competitors, the company claims it has developed a proven and successful operating playbook that differentiates it from competitors. For example, Albertsons employs a decentralized management structure in which division and district-level leadership teams are able to create a superior customer experience and deliver outstanding operating performance.

“These leadership teams are empowered and incentivized to make decisions on product assortment, placement, pricing, promotional plans and capital spending in the local communities and neighborhoods they serve,” according to the company’s S-1 registration statement filed with the Securities and Exchange Commission.

As evidence of its success, Albertsons points to a 7.2% identical store sales increase at non-Safeway stores and by implementing the operating approach at acquired Safeway stores the company is looking to build on the 3% comp increase that banner generated in 2014.
In addition to some solid top line sales growth, another aspect of the Albertsons story of interest to investors – but perhaps less so to suppliers and employees – is the company’s plan to extract a whopping $800 million in synergies from its acquisition of Safeway as a means to improve profitability.

“We expect to achieve synergies from the Safeway acquisition of approximately $200 million during fiscal 2015, or $440 million on an annual run-rate basis, by the end of fiscal 2015. Approximately 80% of our $800 million annual synergy target is independent of sales growth, which we believe significantly reduces the risk of achieving our target,” according to the company.

Big portions of the expense savings are expected to come from familiar sources such as simplifying business processes, rationalizing headcount and extracting more favorable terms from branded and private label suppliers.

“We anticipate extending the expansive and high-quality own brand program developed at Safeway across all of our banners. We believe our increased scale will help us to optimize and improve our vendor relationships,” according to the company. “We also plan to achieve marketing and advertising savings from lower print, production and broadcast rates in overlapping regions and reduced agency spend. Finally, we intend to consolidate managed care provider reimbursement programs, increase vaccine penetration and leverage our combined scale.”