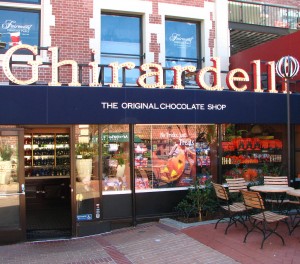 Steve’s breakdown: We got new products and rebranding going on at Ghirardelli so it’s also a good time for a new business call. Jinny Lam is director of marketing.

The company also announced a rebranding effort with new smaller portion-control squares and packaging to help keep the candy crumb-free and fresh.

“We are thrilled to add two new flavors to our growing line of filled bars,” said Jinny Lam, director of marketing for Ghirardelli. “The line delivers the perfect harmony of intense Ghirardelli chocolate with generous, luscious fillings of caramel, mint, raspberry, truffle and toffee bars. With the new innovative packaging and two new flavors, Ghirardelli filled bars allow for a one-piece craving or reward moment and the rest can be saved for later. It’s that simple, and you never have to worry about feeling guilty again.”

All the chocolates have been redesigned so that the candy squares break cleanly into smaller segments, letting consumers determine their portion size.

The new Ghirardelli filled bars will be available in eight-square bars that retail around $2.79 and will go on sale at mass, grocery and specialty retailers nationwide beginning September 2013.

For those who live in the San Francisco area, the new Walgreens flagship store, which opened in early May, features a replica Ghirardelli Square where the chocolate company first began in 1852.