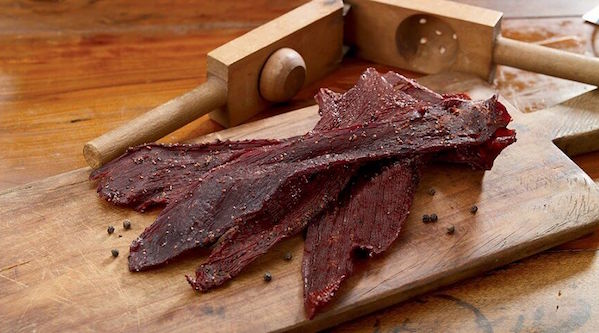 Steve’s breakdown: This article is mostly about the Golden Island Jerky sale but it covers much of the entire category some read on and pick the Jerky you want to represent.

In recent years, Tyson has steadily expanded beyond its core chicken, beef and pork operations in favor of snacks and alternative protein options that are growing in favor with consumers. The move to sell its jerky business could give the company more room to diversify its portfolio.

This focus on alternatives makes senses since the plant-based meat market is expanding at an impressive clip. Sales climbed 42% between March 2016 and March 2019 to $888 million, according to Nielsen data. And Euromonitor predicts the market for plant-based meat substitutes will reach $2.5 billion by 2023.

Still, the meat market is not contracting. Nielsen data showed during the 2016 to 2019 time period, sales of conventional meat were up 1% to $85 billion. In fact, jerky is a particularly bright spot within that category. Meat snacks are one of the fastest growing categories in snack foods today. Sales of jerky topped $1 billion in 2017, and the market is expected to grow 4.2% on an annually through 2022, according to NOSH. With consumers looking for healthy, on-the-go options to fuel busy lives, meat snacks have been attracting beefy investments.

The jerky category is not only commanding these multi-million dollar investments but also tempting Big Food to take a bite and invest. Several major food firms have begun investing in the jerky category, including Hershey, which bought Krave in 2015; Conagra, which owns Slim Jim’s meat snacks and Duke’s meat snacks; and General Mills, which acquired Epic Provisions in 2016.

In 2014, Tyson acquired Golden Island when it bought Hillshire Farms, which had purchased the jerky business a year earlier. The choice to sell a product that is currently popular with consumers may have to do with the dollar figure that comes along with it being in demand and Jack Link’s quest to stay a top jerky producer. Although financials were not disclosed, Tyson likely received a sizable sum for its strategically timed sale and could be stashing it away for a future investment in the growing plant-based protein market.

The recent shuttering of Tyson’s Yappah chips concept, which used upcycled chicken scraps and Molson Coors spent grain, further supports the idea that the company is strategically scrapping excess ventures and consolidating its efforts behind plant-based protein as an optimal avenue for growth.

As for Golden Island, after 22 years of operating in Southern California, the factory will no longer be attached to the Golden State. According to Talk Business & Politics, the facility was rented and the company will exit in accordance with its agreement with the plant owner. However, the move to South Dakota will remove some of the company’s roots. This could be a smart move on Jack Link’s part as the California-based company has been sold now three times in six years. Taking it out of its original context gives Jack Link’s the opportunity to more seamlessly integrate its operations and culture into its own facilities.