We have like, a dozen+ reasons to call Kraft Heinz

Home Industry: Food & BevWe have like, a dozen+ reasons to call Kraft Heinz

We have like, a dozen+ reasons to call Kraft Heinz 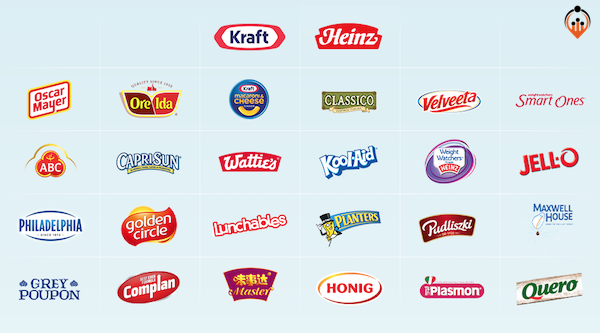 That’s a good trick. Maybe they need to give their agency roster a healthy update. (Boom goes the dynamite) Read on . . .

PITTSBURGH, PA & CHICAGO, IL: Hees used Capri Sun as an example, saying that because the drink wasn’t organic, even consumers who enjoyed it as children would not buy the beverage now. To address this and similar issues with other Kraft Heinz products, the company introduced organic and no-added-sugar versions of Capri Sun, Oscar Mayer hot dogs without byproducts and Kraft mac and cheese with no artificial coloring, he said.

But not all brands work with a natural or healthy marketing approach, Hees noted. It’s also challenging to revamp products quickly, he said.

Like other legacy food companies, Kraft Heinz is searching for ways to keep up with millennials, the biggest consumer block, and their preference for healthy options and convenience. In addition to boosting the nutritional value of some of the company’s biggest brands, the company has invested more than $250 million in new channels such as e-commerce and food service, Hees told The Wall Street Journal.

One of Kraft Heinz’s most notable healthy product makeovers took place more than two years ago, when it phased out artificial colors, flavors and preservatives from its macaroni and cheese. The company kept the reformulation secret from the public for a period of time in order to avoid turning off longtime customers. When Kraft Heinz did reveal the product revamp on the boxed macaroni’s packaging, picky consumers didn’t need to worry about whether or not the changes would hurt the flavor — as they had already been eating the healthier version without knowing.

In a similar move, Nestlé recently made the decision to change its iconic Stouffer’s Macaroni and Cheese to include more fresh and recognizable ingredients. Company executives knew they had to proceed cautiously or risk alienating some key customers, and the company tested 15 different recipes before rolling out a final version to shoppers in January 2017. The ingredient list is now shorter and simpler with artificial colors, flavors and preservatives removed. Frito-Lay, too, is introducing healthier versions of its chips that limit sodium and saturated fat and add more fiber, whole grains, vegetables and protein, according to Food Business News. That portfolio includes Fritos, Cheetos, Doritos, Tostitos, Lay’s, Ruffles and Rold Gold.

Still, companies need to take care when tweaking ingredients lists, and develop bulletproof marketing campaigns around these changes that will attract younger consumers.

General Mills learned this lesson the hard way when it tried swapping artificial for natural colors in its Trix cereal in 2016. The company’s food scientists were not able to duplicate the bright red and neon blue and green colors that customers were used to with fruit and vegetable juices, and consumers took to social media to voice their frustration with the brand’s “depressing” new look. Eventually, General Mills brought back the original, synthetically colored Trix cereal alongside the more natural formula to quell customer dissent.

Changes like this can be costly for food companies, especially since manufacturers may not be rewarded with hordes of new customers. Demand for clean label food is at an all-time high, and a value add that’s on the top of millennials’ shopping lists, but switching to clean ingredients involves high conversion costs and sourcing problems — for example, there is no natural source of the color blue that can sustain the food industry’s need.