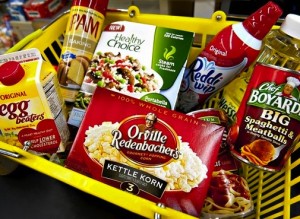 Steve’s breakdown: They are not talking about what the real plan is with the Ralcorp acquisition. Not only do we think this move is a competition killer, it could be a new way to launch a number of new brands. And that means new advertising accounts might be in play.

OMAHA, NE: Private-label foods have hit a “glass ceiling,” according to one market researcher. But on Tuesday ConAgra Foods Inc. picked up a $4.95 billion hammer.

ConAgra said it reached an agreement to buy Ralcorp Holdings Inc., emerging as victor in a 20-month takeover fight. Once the deal closes, Omaha-based ConAgra will become the largest private-label food manufacturer in the U.S.

During the economic downturn that began in 2008, shoppers flocked to budget-friendly store-brand items. Private-label brands—such as Trader Joe’s Joe O’s, which compete withGeneral Mills Inc.’s Cheerios—now make up nearly 22% of packaged-food sales in the U.S., according to Nielsen data, up from 18.4% in 2007.

But the trend has stalled, in part because the price gaps between the national brands and the store brands have narrowed. Noting that private-label foods have lost share in the U.S. for two years in a row, research firm SymphonyIRI Group Inc. earlier this month argued that the products have hit a “proverbial glass ceiling.”

Retailers have reason to love their in-house labels: They have profit margins about 10% to 15% higher than sales of national brands such as Kellogg and Kraft, analysts estimate. Some grocery retailers, like Target and Safeway, have even run ads to promote their store brands.

In the last decade, the rise of private-label products “has been one of the fundamental shifts in how we eat,” said Harry Balzer, chief food industry analyst for market-research firm NPD Group.

But consumption of private-label food peaked in February at 29% and has since slipped to 28%, he said.

“The national brands are not going to roll over,” Mr. Balzer said. “They are responding with their move to everyday low pricing.”

ConAgra Chief Executive Gary Rodkin said that while private-label foods may have slowed as a whole, growth is occurring in certain categories, such as snacks, and at retailers including Whole Foods Market Inc., Costco Wholesale Corp. and Trader Joe’s, which devote extra attention to their store brands. Two of Ralcorp’s key customers are Costco and Trader Joe’s, Mr. Rodkin said.

“There’s always some bumps in the road, if you will, but if you look at the long term, it’s a pretty good growth rate,” Mr. Rodkin said in an interview.

Mr. Rodkin also said he thinks the U.S. food industry will continue to migrate toward more private-label sales, much like in other developed countries. In Switzerland, for instance, 44% of food sales are in private label. “We’re going to become more like that, rather than less like that,” Mr. Rodkin predicts.

Retailers from Wal-Mart Stores Inc. to Safeway Inc. have become more sophisticated in recent years, as they have learned that developing their own brands is a way to differentiate themselves and build customer loyalty in a crowded, cutthroat market.

Gone are the days when the store brand meant bland, generic food in a starkly labeled box or can. In some cases, it is now hard to distinguish a house-brand product from a national brand. For example, Target Corp.’s line of Archer Farms products, with its red rooster label, evokes images of a real place where Alaskan sockeye salmon is raised and sea-salt pretzel caramel ice cream is churned. 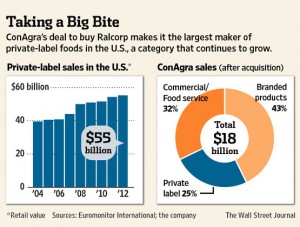 With its purchase of Ralcorp, ConAgra will more than quadruple its size in the private-label segment of the food industry. The deal will make ConAgra the second-largest U.S. packaged-food company by sales, behind Kraft Foods Group Inc. The combination of ConAgra and Ralcorp will create a company with $18 billion in annual sales, behind Kraft’s $19 billion. Ralcorp has annual sales of about $3.8 billion.

ConAgra agreed to pay $90 a share in cash for Ralcorp, a 28% premium to Monday’s closing price. Including the assumption of Ralcorp’s debt, the total value of the deal comes to about $6.8 billion. The offer is just below ConAgra’s bid of $94 a share that Ralcorp ignored, and ConAgra ultimately withdrew, last year. Ralcorp has since spun off the Post cereal business.

The sale price ultimately provides some vindication to Ralcorp, which was criticized by shareholders for not coming to the bargaining table when ConAgra first made overtures. When accounting for the stock split that occurred before the Post cereal spinoff, the combined value of Ralcorp’s acquisition agreement Tuesday and the Post spinoff comes to $107.05 a share.

Mr. Meister, who declined to comment Tuesday, ultimately secured a seat on Ralcorp’s board, a strong sign that St. Louis-based Ralcorp was willing to consider the proposals.

The deal is expected to close by March 31.