A new CMO crosses the finish line at The Breeders’ Cup

A new CMO crosses the finish line at The Breeders’ Cup 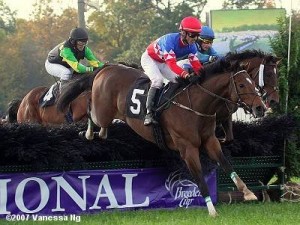 Steve’s breakdown: The new guy, Drew Sheinman, has worked at Coca-Cola, New York Mets, Baltimore Orioles and Madison Square Garden. We suspect trade advertising is going to get a big boost so get in there.

On a personal note, the Breeders’ Cup Steeple Chase has run a number of times at the Far Hills Race Meeting which my family has attended every year since I was knee high to a grasshopper!

Sheinman, from New York, brings a wealth of experience developing and commercializing global celebrity, sports and lifestyle brands and businesses as an owner, entrepreneur and venture partner, most recently with Vision Works LLC, since 2005. Sheinman has worked with premier companies, entrepreneurs and celebrities to develop businesses and client relationships as diverse as the NFL, MTV and Simon Property Group.

Previously, he served as Director of Sports Marketing for Coca-Cola Co. and Vice President, Marketing for the New York Mets; and held senior level marketing and business development positions with the Baltimore Orioles and Madison Square Garden.

He also created sports as entertainment business ventures with MTV Rock n’ Jock, a programming/event franchise partnering the network’s musicians with top flight athletes; The Major League Baseball FanFest, baseball theme park, which Brandweek honored as the “Event of the Year; and Coca-Cola Olympic City for the 1996 Atlanta Games, a 12-acre theme park which generated 750,000 paid admissions. As its first ever Chairman Sheinman led the formation of the Association of National Advertisers (ANA) Event Marketing/Sponsorship Committee.

Sheinman, who will be based in New York, will begin his duties officially on May 13.

“Throughout my career I have had the privilege of being involved with the premiere global sports and entertainment events and the Breeders’ Cup is certainly in that class,” Sheinman said. “It is an honor and a privilege to work with a great brand and management team to help lead the exciting future of the Breeders’ Cup and the Thoroughbred industry.”

“Having known Drew Sheinman for 30 years, I know the Breeders’ Cup is getting an outstanding marketing executive who will continue to grow this tremendous event,” said Jon Miller, President, Programming, NBC Sports and NBC Sports Network.