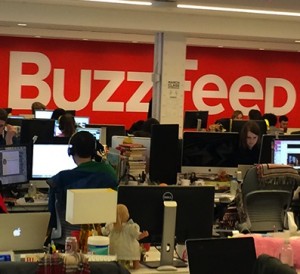 Steve’s breakdown: Some might say this is not a lead but if you’re in the business of branded music and entertainment deals, that’s where the pitch lyes. At Pepsi, that’s what the new guy did and before that, he worked at Motown Records, Def Jam Recordings and Urban Box Office Networks.

BuzzFeed, which has been quietly searching for its first CMO for months, confirmed Mr. Cooper’s hire to Ad Age. “We’re part publisher, part content producer, part ad agency, so the skillset required is someone who is an amazing marketer and someone who can lead the creative teams,” BuzzFeed President Greg Coleman said.

“The landscape of advertising is starting to change so quickly, it takes someone who is doing this full-time from a marketer’s perspective,” Mr. Coleman said.

Mr. Cooper’s most recent title at PepsiCo was CMO for global consumer engagement for the global beverages group. “We want to thank Frank for his many contributions to PepsiCo through the years and wish him nothing but the best in his future endeavors,” a PepsiCo spokeswoman said. The company does not plan to name a successor, she said.

During his time at PepsiCo, Mr. Cooper was heavily involved in Pepsi‘s music and entertainment deals. He joined the company in 2003 after stints at AOL, Motown Records, Def Jam Recordings and Urban Box Office Networks, an internet venture focused on urban lifestyle that he co-founded.

In 2013 he was involved in making brand Pepsi one of the launch advertisers for Apple’s iTunes Radio. In 2011 he was involved with Pepsi’s season-long sponsorship of Fox’s “X-Factor” as it debuted that year in the U.S.

His philosophy is to “approach entertainment as less of a sponsor and more of a creator,” he said in a 2010 interview. “If you’re creating content that’s engaging and [consumers] find value in it, there’s no reason not to look at that as a potential revenue stream,” he said at the time.

That seems like a good fit for BuzzFeed, which generates nearly all of its revenue from helping brands create and distribute articles and videos that resemble BuzzFeed editorial content. Last year, the site hauled in more than $100 million in revenue.

The hiring of Mr. Cooper comes one week after BuzzFeed CEO Jonah Peretti told an audience at the Re/code conference that the website may one day seek an initial public offering, though he didn’t offer a timetable. In the last year, BuzzFeed has built up its leadership team with seasoned executives who have experience working at publicly traded companies. Last summer, the company hired Greg Coleman to serve as its president. Mr. Coleman had previously brought ad-tech firm Criteo public as its president. In February, the company raided Yahoo for Lee Brown, who is now BuzzFeed’s chief revenue officer.

But Mr. Coleman said the hiring of Mr. Cooper is not a signal that BuzzFeed is going public any time soon. “We are not in any planning for an IPO,” he said. “But in the future it would certainly be something we would look at.”

Mr. Cooper’s departure at PepsiCo comes as the marketer continues to diversify its marketing approach beyond music, placing a new emphasis on fashion and design. The ongoing “Pepsi Challenge” global campaign, for instance, includes partnerships with fashion designer Nicola Formichetti, who created his own design concept for a Pepsi can as part of a challenge issued to consumers to create their own design.