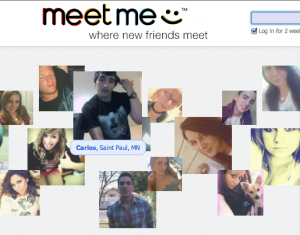 Steve’s breakdown: We think there could be multiple opportunites here considering their growth plans. If you dig the site, let them know and get involved.

“We are excited to complete the final step of the merger integration plan that we laid out in April,” said John Abbott, CEO of MeetMe, Inc. “Now all of our Latin-American users have access to our mobile products for the first time. With the merger integration now complete, we look forward to launching MeetMe in additional languages while continuing our rapid pace of product innovation.”

“In less than one year, the company realized the vision behind the merger: creating a single global brand for meeting new people,” said Geoff Cook, COO, MeetMe, Inc. “To achieve today’s announced transition of Quepasa.com users to the MeetMe platform, the team executed against an ambitious schedule and achieved every milestone. We are pleased that we have managed to grow US traffic to record levels while at the same time growing our share of international audience.”

In mid-August, the company launched in Spanish and Portuguese across all platforms and indicated MeetMe would be in a half dozen languages by the end of the year.

“In September, growing off a small base, MeetMe unique visitors from Brazil increased 800%, from Mexico increased 3000%, and from Spain increased 1900% compared to June,” added Cook. “We are excited to continue our momentum in these countries with the transition of Quepasa.com users to the MeetMe platform.”

MeetMe® is the leading social network for meeting new people in the US and the public market leader for social discovery (NYSE MKT: MEET). MeetMe makes meeting new people fun through social games and apps, monetized by both advertising and virtual currency. With 60% of traffic coming from mobile, MeetMe is fast becoming the social gathering place for the mobile generation. The company operates MeetMe.com and MeetMe apps on iPhone, iPad, and Android in English, Spanish and Portuguese.