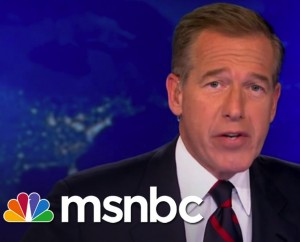 Steve’s breakdown: . . . to launch Brian Williams as the anchor of breaking news and special reports. Anything they did before on that network will not be big enough so get in there and show’em how it’s done.

I bet the folks at MSNBC must be thrilled about this news!

NEW YORK, NY: NBC News has found a new role for evening anchor Brian Williams following his suspension for embellishing his portrayal of his reporting in Iraq in 2003.

Mr. Williams will become MSNBC anchor of breaking news and special reports, the network said Thursday. His replacement, Lester Holt, will get the permanent anchor chair for “NBC Nightly News.”

The decision marks an end to a painful chapter for NBC News and Mr. Williams, one of the most recognizable figures in TV journalism.

“I’m sorry. I said things that weren’t true,” Mr. Williams said in a statement. “I let down my NBC colleagues and our viewers, and I’m determined to earn back their trust.”

NBC News suspended Mr. Williams on Feb. 10 without pay after he acknowledged he hadn’t been in a helicopter hit by a rocket- propelled grenade in Iraq as he had said. Instead, he was in an aircraft following others that came under fire, NBC News and Mr. Williams said in correcting the original story. Mr. Williams apologized after servicemen disputed his story, blaming the “fog of memory” for his misstatements.

An “extensive review” found that Mr. Williams made a number of inaccurate statements about his own role and experiences covering events in the field, the network said. Mr. Williams made most of those statements on late-night programs and during public appearances, not on NBC News platforms, and usually after the events, NBC News added.

Since Mr. Williams’s suspension, Mr. Holt has largely kept “Nightly News” atop the ratings, although ABC’s “World News Tonight” has narrowed the gap, and surpassed NBC in total viewers twice in recent weeks.

In March, Comcast Corp.‘s NBC hired back Andrew Lack as chairman of NBC News and MSNBC in an effort to move on from the controversy. Mr. Lack previously spent 10 years at the network. He was NBC’s president and chief operating officer from 2001 to 2003 and ran NBC News for eight years before that. Under Lack’s leadership, the “Nightly News,” “Meet the Press” and “Today” rose to the top of the ratings.

Mr. Williams, 56, who joined NBC News in 1993, served as chief White House correspondent and anchor of “The News With Brian Williams” on MSNBC and CNBC. He replaced Tom Brokaw as anchor of the “Nightly News” in late 2004, and renewed his contract in December for five years. His salary is about $10 million a year, according to the Los Angeles Times.