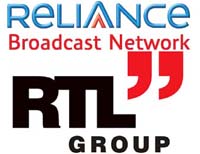 Steve’s breakdown: The pitch is specifically for the group’s upcoming TV channels being launched by the joint venture.

MUMBAI, India: The Ratti Report has learnt that the JV (joint venture) company between Reliance Broadcast Network Limited (RBNL) and the Luxembourg-based media company RTL Group, is looking for a creative partner.

Specifically, the group is looking for an advertising agency for its two upcoming TV channels that are slated to be launched over the coming months.

Senior level sources in the television industry who are close to the development have confirmed the news.

The creative pitch is currently underway in Mumbai and a few agencies are already in the process of making their presentations. The result is expected to be announced in three weeks to a month’s time.

The pitch comes in the wake of RBNL’s 50:50 joint venture agreement with the RTL Group; it may be recalled that this JV was announced in March 2011.

Of the two new channels, one is slated to be a reality channel with international content, most of which will be sourced from the group’s production house FremantleMedia, which has a significant presence in the Indian market. The other channel will be an action channel, targeted specifically at the urban male, and somewhat similar to AXN.

At the time of entering into the JV with the RTL Group — a European television and radio network — RBNL (owned by the ADA Group) informed BSE that it is doing so to launch a series of television channels in India. In the future, the JV will also explore owning, and/or operating Hindi and regional language channels.

The RTL Group has 40 television channels and 33 radio stations across Europe. It boasts 9,500 hours of TV programming per year across 54 countries, more than 300 programmes on-air or in-production worldwide, and more than 20,000 hours of content selling in over 180 countries, globally.