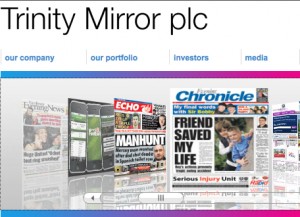 Steve’s breakdown: Trinity Mirror is looking for an agency to handle an advertising campaign for a new deals website that it plans to launch next year.

LONDON: UK: The group, which publishes the Daily Mirror and a range of local newspapers, has already approached a number of agencies, with pitches expected to take place before Christmas.

Trinity Mirror currently works with a number of agencies including DLKW Lowe, which was appointed to its newspapers’ advertising business in 2008.

The appointed agency will be responsible for an advertising campaign promoting a new deals website, in the style of Groupon and other deals sites, that the company is looking to roll out nationally next year.

Trinity Mirror is expected to boost its digital portfolio after “difficult trading conditions” as a result of falls in public sector advertising, tax increases, weak retail sales and substantial hikes in the cost of newsprint.