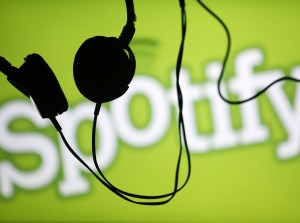 Steve’s breakdown: Getting in the middle Spotify and Apple is a great place to be right now. And that’s especially true now that Spotify closed $526 million in equity cash-raising.

Plus, if they’re going to be playing with the big guys, they should not be doing the marketing in-house!

The nine-year old Swedish company closed on Tuesday a $526 million equity cash-raising — money that will help fund what promises to be a costly marketing battle with its deep-pocketed US rival.

At the same time, Spotify, now worth $8.5 billion based on the equity stake sold to the investors, according to a person familiar with the matter, said it had 75 million users — including 20 million who pay a $9.99 a month subscription fee.

Apple unveiled on Monday a $9.99 a month subscription service and is expected to unleash a massive marketing campaign went it kicks off later this month.

The cash raised by Spotify could also be used to help pay for an aggressive geographic expansion plan and a move into other forms of content — like video and podcasts.

Abu Dhabi’s sovereign-wealth fund also agreed to invest in the round, a person familiar with the matter said in April.