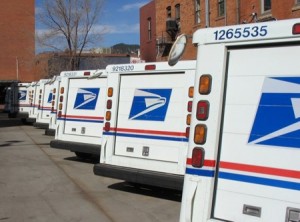 Steve’s breakdown: The post office is being tight lipped about this review which makes me a bit concerned about the review process. But if you’ve been in this movie before, there’s not reason to do it again.

While all of the incumbents could not be determined, Campbell-Ewald is the lead on creative and media while Draftfcb, Chicago handles direct marketing. Last year, the USPS spent $103 million on measured media, according to Nielsen. (That amount does not include online spending.)

A USPS spokesperson, who said RFPs have been sent out to agencies, declined to comment on the timing of the review or whether it was mandated by the government at the end of a contract period. The spokesperson also declined to say whether incumbent agencies are participating in the review or to say when the USPS will make agency decisions. The USPS went public with the RFP process in early March, issuing a March 14th deadline for interested agencies to contact the postal service.

A spokesperson at C-E referred inquiries to the USPS and one at Draftfcb did not respond to questions. The USPS initially selected those Interpublic agencies, along with corporate sibling Initiative Media North to handle media planning and buying in 2002, after a review. (The media has since moved to C-E from Initiative.)

Back in the 2002 review, several of the incumbent agencies had been working on the business for less than a year. Among them were Leo Burnett USA as the creative lead agency; the agency then-known as Foote, Cone & Belding Worldwide for direct marketing; Frankel, for point-of-purchase and MediaCom for media buying. (The incumbents, in partnership with other agencies, participated in the review that began with 21 agencies and lasted three months.) The USPS had not included its multicultural agencies in that review process.

The 2002 review had been triggered partially because of the financial pressure the USPS experienced in the aftermath of the Sept. 11 attacks: Revenues and costs were affected after customers delayed or canceled mailings and decontamination procedures drove up costs after the discovery of mail containing anthrax. The USPS said then it would see savings from having a single contract covering the Interpublic agencies.