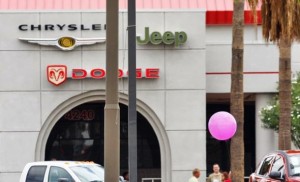 Steve’s breakdown: While on our daily search for the leads you need, we found the article below. The headline read: Chrysler reopening area (Dallas) dealerships closed in bankruptcy.

We wondered if this was a national trend among all brands. Then we ran into Bruno Lucarelli of BCI Media, one of the nation’s premiere dealership marketing professionals, and asked him.

Seems we were dead wrong. This was just a Chrysler phenomena. Mr. Lucarelli told us when Chrysler went bankrupt, that opened the door for corporate to close all the under performing dealerships as well as all the dealerships with owners with big mouths they hated dealing with.

Needless to say, this created holes in their network once sales started skyrocketing. And this is why Chrysler is opening dealerships and every single one could use an agency. Start at this link to get moving with your hunt!

DETROIT, MI: With sales soaring, Chrysler will reopen at least three of the four local dealerships that closed during its bankruptcy in 2009.

Over the last couple of years, as Chrysler has regained its health, officials have been assessing the company’s presence in various markets, concluding that this area needs 11 dealerships.

The company has eight, including Freedom Dodge-Chrysler-Jeep in Duncanville, which reopened last August.

“We knew when we came out of bankruptcy that we didn’t have enough dealers in Dallas,” said Peter Grady, vice president of network development and fleet at Chrysler Group LLC. “But we wanted 11 quality dealers.”

Chrysler’s shortage of dealers in this market — one of the strongest auto-sales regions in the U.S. — cost the company “5,500 to 6,000 sales in each of the last two years,” Grady said.

“That’s why we’re putting a priority on restoring these points,” he said.

Those lost sales represent about $180 million in annual revenue. Grady believes, though, that he has the retail core he needs now in the Dallas area.

The franchises for three of the closed dealerships were surrendered voluntarily during the bankruptcy — two of them by giant dealership group AutoNation. Chrysler cut Manuel Dodge in Richardson, the fourth franchise.

Roundtree Automotive Group, a 27-year-old company now based in Dallas, bought one of the dormant dealerships in Duncanville last August, reopening it as Freedom Dodge-Chrysler-Jeep. It employs 60 people, said Matt Stinson, chief executive of Roundtree, which was founded in Shreveport, La.

The group is also building a 50,000-square-foot Dodge-Chrysler-Jeep dealership on Mockingbird Lane near Love Field that should open this fall, employing 70 people.

In addition, McKinney dealer Pat Lobb — the top-selling Toyota dealer in the area — plans to break ground in July on a 50,000-square-foot Dodge-Chrysler-Jeep dealership in Frisco that will employ 75 people.

“The whole issue we have today that we didn’t have three years ago is we have markets now where dealers can operate and invest in their stores with the expectation of a return on investment,” Grady said.

Sales on up and up

Last year, Chrysler Group’s sales in the U.S. increased 26 percent, compared with a 10 percent rise for the overall auto industry.

In 2010, the company’s sales grew 16.5 percent. Through April of this year — driven by the Jeep Grand Cherokee and Wrangler, Ram pickup and other vehicles — sales were up 33.4 percent, according to Automotive News.

Nonetheless, when Chrysler approached Stinson and Lobb, both initially had reservations.

As part of the bankruptcy deal, Fiat SpA took a controlling interest in Chrysler. Both automakers have struggled with quality in the recent past.

“I think everybody was very concerned about them,” said Stinson, whose group includes Ford-Lincoln, Chevrolet-Buick-GMC, Nissan and Infiniti dealerships.

After some research, Stinson said, he felt confident about Chrysler and the new vehicles it is bringing to market. One enticement was that the Park Cities and downtown area neighborhoods have been without a Chrysler dealership for several years.

“We were willing to invest in Dallas because I don’t see Chrysler, Jeep or Dodge going away,” Stinson said. “It was an opportunity to have two dealerships for a limited investment in a great market.”

He declined to disclose Roundtree’s investment.

A typical average-size dealership costs at least $10 million, including the expense of land. Although manufacturers sometimes help in financing dealerships, individual dealers are largely responsible for the expense.

Lobb said he was also worried at first about quality and what sorts of cars and trucks Chrysler was developing.

“I talked to a lot of dealer friends and asked them ‘How’s the product, how’s the quality?'” Lobb said. “They told me this is a different company than the old company. Everything I heard was positive.”

Lobb also declined to say what he was investing in his new dealership.

“It’s an incredibly good site,” he said. “Right now, we are right in the middle of auto row — among Stonebriar Chevrolet, David McDavid Honda and Bankston Ford.”

Every day, it gets easier to sell Chrysler to prospective, well-regarded dealers, Grady said.

“As soon as we showed dealers what we could do with just a refreshing of some of our older vehicles, they could see a huge opportunity,” he said.