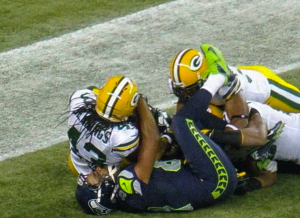 Steve’s breakdown: We’ve been debating whether to run this story all day. ESPN 1, 2 & 3 can’t stop talking about it. But either way, I see a PR problem and someone needs to fix it. Are you up to the task?

And Not For Nothin’: This is one more reason why unions are important.

NEW YORK, NY: I have covered the NFL for more than 30 years, and last night, I witnessed perhaps the worst call I have seen.

If you stayed up to watch the end of the Green Bay-Seattle game as so many of us did, I’m sure you agree with me and millions and millions of others who believe the replacement officials blew it big time, and the NFL has more egg on its face than any time in league history.

Unless you’re a Seahawks fan, of course. Seattle coach Pete Carroll called it, “an extraordinary win.” It was extraordinary, all right, but only the way the officials made the wrong call in the 14-12 Seahawks’ victory.

If the blown call on the last play doesn’t get the owners to convince commissioner Roger Goodell to end the officials’ lockout, nothing will unless the officials cave on their demand to keep their full benefits.

Hey, Bob McNair, the Texans could be next! Hey, Jerry Jones, it could happen to the Cowboys, too!

If you missed it, on the last play, Seattle quarterback Russell Wilson threw a Hail Mary to the left corner of the end zone. Seahawks receiver Golden Tate pushed safety Sam Shields out of the way as he went up. Blatant pass interference but smart because no way do the officials make that call in that situation.

Tate went up for the ball, but Packers safety M.D. Jennings got the ball and pulled it to his chest as they went down. Tate kept one hand in. When they hit the ground, Jennings had the ball clutched to his chest with both arms around it. Tate still had one hand in.

As long-time NFL referee Gerry Austin, who was in the ESPN booth, explained to the audience, that wasn’t simultaneous possession.

Two officials were on top of the play quickly. One waved his hands to signal stop the clock. In other words, the Packers had the ball and the game was over. But the other official looked down, and even though Jennings had control of the ball and pulled it away from Tate’s hand, he signaled touchdown.

Then, the referee watched on replay and upheld the decision on the field, giving Seattle the victory.

Jon Gruden went ballistic on the ESPN broadcast, calling it an interception. Austin explained on the slow motion replay why it wasn’t simultaneous possession — because Jennings got control of the ball with both hands and came down with it. If it had been simultaneous possession, it would have gone to the offense.

So the reason for the controversy was that Elliott blew it on the simultaneous possession ruling. And the league official in the replay booth — installed this season to help the referee with the replay — had no influence on the replay call or didn’t know the rule, either.

Around the country, reaction from players and fans has been for the NFL to end the lockout and bring back the regular officials. The end of the Green Bay fiasco, dropping the Packers to 1-2, was only the worst of many mistakes committed by the replacement officials over the weekend.

And they’ll be back again. Imagine the reaction to the replacement officials when they step on the field before the Packers’ game at Lambeau Field.