The Robot you should get in front of 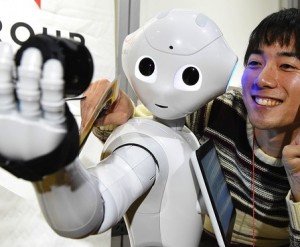 Steve’s breakdown: So Pepper the robot goes on sale in Japan this weekend. And depending on whether it starts running over pets or not, it’ll go one sale elsewhere.

If I were you, I’d watch and study this project like a hawk and pitch the USA introduction the moment you figure it out. Don’t wait for them . . .

TOKYO, Japan: SoftBank, the company behind the robot, is planning to release 1,000 robots every month.

Although the upfront price is relatively cheap for a sophisticated robot – SoftBank is actually selling it at below manufacturing costs – customers will also have to pay monthly service fees of up to 24,000 yen and sign up to a three-year contract.

“SoftBank is hoping to make money from apps, but it is risky as it is not clear whether anyone will develop any for it,” said Prof Sharkey, from the University of Sheffield.

There will be 100 apps available for download at launch.

The robots will be manufactured by FoxConn. Chinese online retailer Alibaba is also partnering. Both are investing $118m in SoftBank’s robotic division and will take 20% shares in the company.

No date has yet been set for when Pepper will go on sale outside of Japan, but Softbank chief executive Masayoshi Son said it would probably happen next year.

Pepper can remember faces and is programmed to recognise human emotions.

“It looks excellent, and I think that it is good at conveying human-like gestures – but the way it detects human emotions might be over-hyped,” said Prof Sharkey.

“I think that they are over-claiming on its speech functions, too. The conversations are very one-sided, and it asks a lot of questions,” he added.

Featuring more than 20 motors and highly articulated arms, Pepper is being touted as a household robot, assisting elderly people or for use in a family.

But Prof Sharkey is not convinced it will be a hit with consumers.

“There is talk of it being an assistant, but it can’t lift anything, so it is really a very limited companion,” he said.

Japan has a rising elderly population, and the government is keen to use technology to help ease its overburdened healthcare system.

But the use of robotic assistants has not always gone well, according to Prof Sharkey.

“There is a big fuss when these things are launched in Japanese care homes, but go back after a year and they are in a cupboard,” he said.