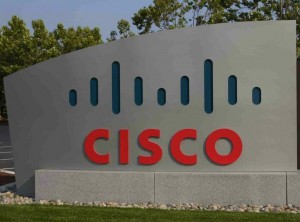 Watch the “Keynote Q&A with Chambers and Robbins” on the home page.

Among other things, the announcement confirms what Re/code reported earlier this week: That chief technology and strategy officer Padmasree Warrior will be leaving in September following a few months as a strategic adviser. She is said to be exploring some jobs either as a CEO or as the managing partner of a venture capital firm. Her departure follows that of President Rob Lloyd and COO Gary Moore, which Cisco announced Monday.

Hilton Romanski, currently head of Cisco’s mergers and acquisitions operation as well as its $2 billion investment portfolios, will be taking over Warrior’s dual roles as CTO and chief strategy officer.

Edzard Overbeek, senior VP of services, will become a strategic adviser for one year. Joe Cozzolino, the current head of Cisco’s service provider mobility and video infrastructure businesses units, will take over in that role.

There’s one key new name: Ruba Borno, head of the media and telecommunications group at the Boston Consulting Group, will be joining Cisco as chief of staff.

Chris Dedicoat, a 20-year Cisco veteran and currently senior VP for Europe, the Middle East, Africa and Russia, will take over as senior VP for worldwide sales — the role that Robbins held before being named CEO.

Cisco chief information officer Rebecca Jacoby will be senior VP of operations. She’ll be in charge of Cisco’s supply chain, business services, security and internal IT. Guillermo Diaz, a senior VP for IT, will replace Jacoby as CIO and will report up to her.

Karen Walker was named chief marketing officer, replacing Blair Christie, who has been on a leave of absence. She previously ran Cisco’s go-to-market operations. She joined Cisco from Hewlett-Packard in 2009.

Kelly Kramer, who replaced Frank Calderoni as chief financial officer a few months ago, will remain in that role.

Now that the senior leadership team is in place, there will probably be more changes throughout the company in the next layer or two down. Robbins has already promised that he will be focusing on “acceleration, simplification, operational rigor and culture.” All of those sound like euphemisms for personnel changes.