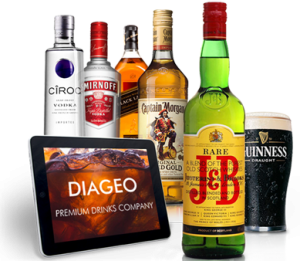 Steve’s breakdown: Diageo North America has a lot of long standing agency partners that the out going CMO/CIO was dealing with. The new guys could shake things up.

Currently managing director of global reserve for Diageo, he will report to the Diageo North America president and will be a member of the North America executive team.

Diageo chief marketing officer Syl Saller said: “James brings with him a unique breadth of experience, having held a range of marketing, general and commercial management roles during his two decades within Diageo. His strength in leadership, creative rigour and proven track record in building brands ranging from Guinness to Johnnie Walker Blue Label will be a huge asset to our North America business.”

The company says that during his leadership of Diageo’s Global Reserve business, Thompson built a strengthened commercial foundation and invested behind luxury brand building and innovative marketing platforms at scale. “Ensuring that this focus has been central to all business activity, he has placed Reserve at the forefront of luxury marketing, driving accelerated growth and extending Diageo’s leadership position across the segment,” says the company.  Prior to this, he spent six years as chief marketing officer, Asia Pacific where he was also a member of the Asia Pacific executive team and is said to have helped deliver growth to the business by transforming Diageo’s participation in the luxury segment and building a “powerful innovation pipeline”.