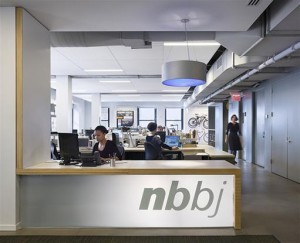 NEW YORK, NY: NBBJ, a global architecture and design firm, today announced that it has appointed Tim Leberecht as its Chief Marketing Officer. Leberecht joins NBBJ from Frog Design where he led the marketing organization from 2006 to 2013 and helped transform the company into one of the world’s foremost design and innovation consultancies. He will direct NBBJ’s worldwide marketing, business development and communications from the firm’s San Francisco office.

“We’re thrilled to have Tim joining us,” said NBBJ managing partner Scott Wyatt, FAIA. “With his experience positioning Frog Design at the forefront of design innovation, and his continuing mission for brands to provide value, he’s exactly the person we were looking for as our first-ever chief marketing officer. His presence here underscores our ambition to become a leading force in transforming human experience and business performance through design.”

“I’m honored to join a firm with such a strong legacy, ethos and ambition,” said Tim Leberecht. “It’s an exciting time, as design’s value as a key driver of innovation in business and society is now being widely recognized, and the boundaries between disciplines are dissolving. I believe NBBJ has a tremendous opportunity to lead this transformation and further enhance the impact of the industry.”

Before joining NBBJ, Tim Leberechtwas the chief marketing officer of leading design and innovation consultancy Frog Design from 2006 to 2013. Previously, he had held marketing positions with software company Mindjet, the Athens 2004 Olympic Games, and Deutsche Telekom.

A widely published author and speaker, Leberechthas written for publications including Fast Company, Forbes, Fortune, Management Innovation Exchange, PSFK, Rotman Magazine, The European and Wired, and spoken at venues including TED, The Economist, DLD, Next, Re:Publica, the Futurist CMO Summit, and the Silicon Valley Bank CEO Summit. His 2012 TED Talk on “3 Ways to (Usefully) Lose Control of Your Brand” has garnered more than 450,000 views to date.

Leberecht was appointed to serve on the World Economic Forum’s Global Agenda Council on Values. He is the founder of the award-winning Design Mind magazine and the organizer of the Reinvent Business hackathon. He earned master’s degrees in communication management from the University of Southern California, Los Angeles, and in cultural studies from the University of Lüneburg in Germany. He was born and raised in Germany before moving to California in 2003 and currently lives in San Francisco.