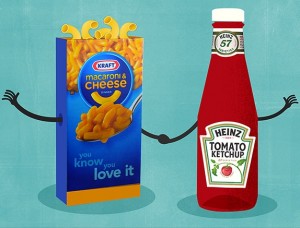 Steve’s breakdown: It looks like there will be no CMO because each unit will handle marketing for themselves which could mean multiple agency partners. A list of the new leadership is below.

“Our new leadership team represents the best of the best in business with proven track records for delivering results,” said Bernardo Hees, future CEO of the proposed Kraft Heinz Company. “I am thrilled that this world-class group of executives will join me to further strengthen our iconic brands with our industry-leading go-to-market strategies, innovation pipeline, and global infrastructure.”

Effective upon the close of the merger transaction, The Kraft Heinz Company senior leadership team is:

Emin Mammadov is appointed Zone President of Russia, India and Middle East, Turkey & Africa. Mr. Mammadov joined Heinz in 2006 as Marketing Director for Heinz Russia and has been President of RIMEA since 2013.

Michael Mullen is appointed SVP of Corporate and Government Affairs. He will be responsible for leading internal and external communications, CSR and government affairs. He will also have responsibility for the Company Foundation, real estate and facilities. Mr. Mullen joined Heinz in 1998.

Eduardo Pelleissone is appointed EVP of Global Operations. In this role, Mr. Pelleissone will have direct accountability for the Company’s supply chain, quality, procurement and operations functions in North America and globally. Mr. Pelleissone joined Heinz in July 2013 as Head of Operations.

Melissa Werneck is appointed SVP Global Human Resources, Performance and IT. Ms. Werneck joined Heinz in July of 2013 and led Heinz’s talent development and the Integrated Management System, which includes the Management by Objectives (MBO) Program.

George Zoghbi is appointed Chief Operating Officer of U.S. commercial business. In his role, Mr. Zoghbi will lead the Company’s more than $19 billion U.S. business comprised of five commercial business units. Mr. Zoghbi has been COO at Kraft since February 2015. Mr. Zoghbi joined Kraft in 2007 as Vice President and Area Director of Australia and New Zealand.

Given the size of the combined business, Canada will now become a stand-alone Zone reporting directly to Bernardo Hees. The President of Canada will be announced in August. Chris Kempczinski will remain with the Company until September to assist the Kraft Canadian and Overseas Business transition. Chris will assist with the integration in Canada, and support the roll-out of Kraft brands outside North America. Most recently, Chris was EVP, Growth and President, International.

As part of Bernardo Hees’ extended leadership team, the following will report to Mr. Zoghbi, head of the U.S. commercial business:

Eduardo Luz is appointed President of the U.S. Ketchup, Condiments, Sauces, Dressings and Frozen business. This includes the entire Kraft and Heinz U.S. condiments and frozen portfolio. Mr. Luz joined Heinz in June 2013 and was rapidly promoted to serve as Zone President of Heinz North America.

Joe Fragnito is promoted to President of the U.S. Beverages & Snack Nuts business. Mr. Fragnito joined Kraft in 2000 and most recently was VP of Marketing for Meal Combinations, including Lunchables.

Tom Lopez is promoted to President of the U.S. Meal Solutions & Desserts business. Mr. Lopez joined Kraft in 1999 and most recently was VP of Marketing for Refreshment Beverages.

Sergio Nahuz is promoted to Head of U.S. Sales. Mr. Nahuz joined Heinz in July 2013 as CFO of Heinz Europe and most recently served as Managing Director of Heinz’s U.S. Consumer Products business.

Nina Barton is promoted to SVP of Marketing Innovation, Research and Development. Ms. Barton joined Kraft in 2011 and most recently was VP of Marketing for Coffee.

The following individuals will remain with the Company for a transition period:

Diane Johnson May, EVP of Human Resources at Kraft, will leave in December after 35 years with the Company. From now until December, Ms. Johnson May has agreed to work full-time as a close advisor to Bernardo Hees and Melissa Werneck.

Tom Corley, EVP, U.S. Sales at Kraft, will work with Sergio Nahuz, Head of U.S. Sales during a transition period until November.

“I sincerely thank these committed executives for their leadership and numerous contributions to Kraft, and I wish them all the best in the future,” said Bernardo Hees.