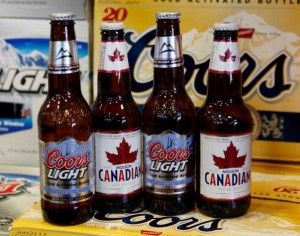 Steve’s breakdown: The big-beer business is in flux right now so I suspect there’s going to be more changes and shifts everywhere. Get in line at ever brewery you can to catch the new biz where ever it falls.

“We are fortunate to have attracted such distinguished and seasoned executives to the company and I look forward to Torsten, Celso and Lee joining our international leadership team,” said Kandy Anand, President of Molson Coors International. “At Molson Coors, we are committed to accelerating our expansion into new markets and building up our capabilities, particularly in the areas of consumer marketing, supply chain and transaction work is essential to this aim. Leveraging this team’s proven strengths will significantly enhance our impact as we move forward with our global growth plans.”

Kuenzlen is a veteran marketing executive with deep strategic, marketing and operational management skills, as well as demonstrated experience in building and leading international teams. During his 17 years with Coca-Cola, Kuenzlen led commercial and marketing operations across the globe, including Europe, Latin America & Asia, and was part of a management team tasked with transforming their business across Africa. He received a master’s degree in International Business Management from Rheinland Pfalz University in Germany, and served as an officer of the German Air Force.

White joins Molson Coors with more than 25 years in consumer products. His initial assignments were in engineering first with Silgan White Cap, then with M&M/Mars and Campbell Soup Company. More recently, White had accountabilities in general supply chain management with PepsiCo where he held the position of Vice President and General Manager, Americas Concentrate Operations. This included leading all aspects of the Supply Chain throughout the Americas (Canada to Southern Cone) and the Asia Pacific region.