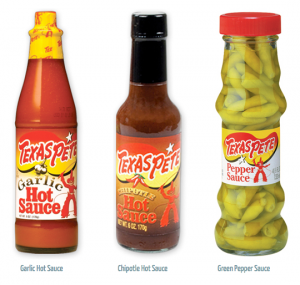 Steve’s breakdown: These promotions may be all in the family but that doesn’t mean they’ll be doing thing like their dad’s did.

In fact, they’ve recently introduces Cha Sriracha to compete with Huy Fong Foods which wrote about earlier this week.

WINSTON-SALEM, NC: TW Garner Food Co., the maker of Texas Pete Hot Sauce, has made a change in its leadership with the promotion of four of its highest-ranking executives.

“Glenn, Matt and Heyward are the fourth generation of family members at TW Garner Food Company and will be the leaders of our company as we move into the next few decades,” Riddle said. “They have proven themselves time and again, and I could not imagine assembling any better leadership team.”

The new team will operate out of TW Garner Food’s corporate offices in Winston-Salem.

Glenn Garner said that the main reason for the changes is to open up the executive vice president and vice president levels to nonfamily members and shareholders.

The company expects to make these changes with nonfamily members in the future.