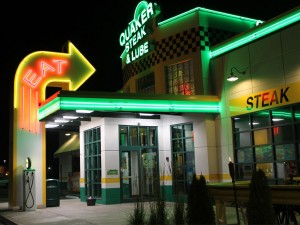 Steve’s breakdown: The new CMD has been working her way up at the “The Lube” for years and now that she’s s finally on top, there could be some changes.

SHARON, PA: The Award-Winning casual-dining franchise Quaker Steak & Lube®, known for its Best Wings USA and more than 25 sauces, has announced promotions for key leaders, including Megan Duniec to the position of Chief Marketing Director, Tony Quintal to Senior Director of Restaurant Operations/ Loss Prevention and Danielle Walker to assume the position of Director of Franchise Field Marketing.

“Megan, Tony and Danielle have all contributed to The Lube’s® success in a meaningful way over the years by leading key initiatives to help drive improvements across our brand as we’ve grown,” said Greg Lippert, President and CEO of Quaker Steak & Lube®. “We look forward to leveraging their leadership and respective capabilities in their new roles to strengthen Lube Nation.”

Megan Duniec has been promoted to Chief Marketing Director, where she will direct the marketing and advertising strategies for the brand and the field marketing team. Duniec will also provide leadership support to the culinary team and will oversee loyalty programs, social media strategies, among other responsibilities.  In addition, Duniec will direct the outside support agencies that provide brand development programs and public relations for Quaker Steak & Lube®.  Duniec has been with Quaker Steak & Lube® for six years and was instrumental in establishing the brand’s Local Store Marketing Program initiative. Prior to joining The Lube®, she worked on the agency account team for Doner Advertising based in Cleveland, OH. Mrs. Duniec received her Bachelor of Arts in Marketing from Baldwin Wallace University.

Tony Quintal has been promoted to Senior Director of Restaurant Operations/ Loss Prevention. In his new role, he will develop business strategies and market expansion through new guest acquisition. He will also be responsible for measuring market performance and will oversee the company-owned restaurant local marketing programs. Quintal will retain financial and analytic oversight on the restaurant level loss prevention and financial analysis. He joined The Lube® four years ago and has led the company to improvements within systems and finance reporting. Mr. Quintal began his career at Quaker Steak & Lube® as a Site Development Analyst and received a Bachelor of Science in Hotel Administration from Cornell University.

Danielle Walker has been appointed to Director of Franchise Field Marketing. In this role, she will oversee The Lube’s® franchisee restaurant groups and their respective local marketing programs. Walker first joined the brand in 2009 as a Marketing Area Coordinator at the Canton, Ohio location and earned a Bachelor of Arts degree from Kent State University.

Founded in 1974, Quaker Steak & Lube® now has more than 55 locations across 16 states. The compelling decor, including race cars suspended from the ceilings, motorcycles, Corvettes and motor-themed memorabilia, combined with its craveable food and SuperCharged events, has created a cult-like following for The Lube® for more than 40 years.

Follow The Lube® on Twitter and Instagram at @QuakerSteak and on Facebook at Quaker Steak and Lube. For more information, visit www.QuakerSteakAndLube.com. Join Lube Nation today by signing up for our e-mail club at http://thelube.com/qsl/email_club.html.

For more information about franchise opportunities, contact Zeb Hastings at 1-877-MYLUBE1 (1-877-695-8231) or by email at zhastings@thelube.com, or visit www.lubefranchising.com.

Founded in 1974 and built in an abandoned gas station in Sharon, Pa., Quaker Steak & Lube® has expanded to more than 55 locations throughout the United States. The unique decor, including gas station memorabilia, classic cars, motorcycles, race cars and corvettes suspended from the ceilings combined with the crave-able food and high-octane events has afforded The Lube® a cult-like fan following. Today, Quaker Steak & Lube®has become one of the fastest-growing restaurant chains in the country, and has won hundreds of national and international awards for its wings and more than 25 different wing sauces.