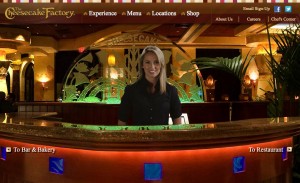 Steve’s breakdown: OK – – The new guy is coming from Hollywood and before that, he had a consulting gig with Wieden + Kennedy as a client PLUS the press releases for this announcement where everywhere!. None of this makes an sense coupled with The Cheesecake Factory so I’m expecting big changes. FYI: Their talking website is soooo 2005!

CALABASAS HILLS, CA: The Cheesecake Factory Incorporated (NASDAQ: CAKE) today announced that Donald Evans joined the Company as Chief Marketing Officer. Mr. Evans will be responsible for all aspects of the Company’s marketing and branding, including planning and executing marketing strategies, and social media and other publicity campaigns.

Mr. Evans’ experience, spanning over 15 years, focuses on brand and product marketing for a number of major Hollywood studios and as a consultant, primarily to clients in the entertainment industry. He spent 11 years with The Walt Disney Company, most recently as Senior Vice President of Animation Marketing for Pixar Animation and Walt Disney Animation Studios. In that role, he was responsible for all aspects of strategic marketing, including traditional and digital campaigns, publicity, research, media and in-theater marketing, resulting in successfully publicizing the studios’ biggest animated releases. In addition, Mr. Evans served as CEO of 33 Consulting, a firm he founded, whose clients included creative agencies such as Wieden + Kennedy and mOcean, where he developed film marketing and strategy plans, as well as clients such as Activision.

“Donald is a seasoned executive who has built his career on marketing high-caliber consumer brands and products. He has a deep understanding of marketing strategy and has demonstrated the ability to create innovative approaches that are on-brand and of high quality. He is also well-versed in directing digital strategies using social media in order to drive consumer awareness and engagement. We are excited to have Donald join our senior management team and are confident that his leadership will help support the future growth of our concepts,” said David Overton, Chairman and CEO.

About The Cheesecake Factory Incorporated

The Cheesecake Factory Incorporated created the upscale casual dining segment in 1978 with the introduction of its namesake concept. The Company operates 167 full-service, casual dining restaurants throughout the U.S., including 153 restaurants under The Cheesecake Factory® mark; 13 restaurants under the Grand Lux Cafe® mark; and one restaurant under the RockSugar Pan Asian Kitchen® mark. The Company also operates two bakery production facilities in Calabasas Hills, CA and Rocky Mount, NC that produce over 70 varieties of quality cheesecakes and other baked products. To learn more about the Company, please visit www.thecheesecakefactory.com.