And Now, A Word About Burning Man (free to see)

And Now, A Word About Burning Man (free to see) 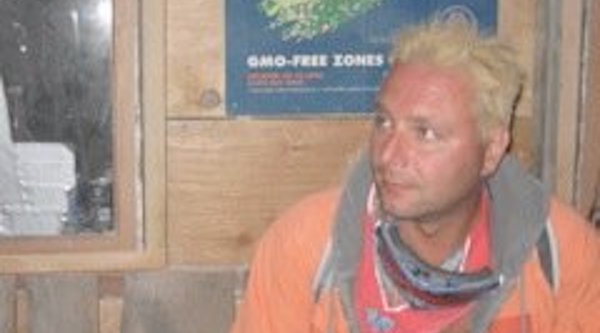 Steve’s breakdown: I have attended Burning Man 10 times and have been closely involved with globally know projects that have taken place there. For all who speak about the commercialization of the event and have never attended, you’re right. It’s a cesspool of debauchery no human should endure. Save yourself and do not attend. (Can you smell the sarcasm?)

BTW: That’s me getting interviewed at Radio Electra 89.9FM in Black Rock City (AKA Burning Man).

So where’s the lead? There is none but I needed to share this WSJ article to show how ridiculous some people are, including the Wall Street Journal!

GERLACH, NV: One of the main principles of Burning Man is “radical inclusion,” but organizers of the annual festival in the desert are taking radical exception to new government proposals they say would kill its countercultural spirit.

Concerned that it is vulnerable to a mass-casualty attack, the Bureau of Land Management wants to encircle Burning Man’s makeshift desert town with thousands of physical barriers and have security guards screen attendees, called “Burners,” for contraband. The agency, which manages the federal land 100 miles northeast of Reno where the festival takes place every August, is also calling for organizers to place dumpsters on site and to haul out trash privately to lessen the impact on nearby communities.

If implemented, the measures would send the festival’s total expenses up nearly 60% from its current $38 million, said Marnee Benson, the festival’s associate director of government affairs. Money isn’t the only issue, though. “The vision the BLM has laid out for Burning Man is not the vision we would choose to produce,” Ms. Benson said.

The proposals are part of a draft environmental-impact statement released by the federal government to help it decide on a request by Burning Man’s organizer—Black Rock City LLC—to extend its permit through 2028 and increase the number of Burners and support staff allowed in to 100,000 from 80,000.

The BLM is scheduled to decide on the permit request by early August, a few weeks before this year’s event is set to begin. Officials said many of the proposed new security measures wouldn’t kick in until next year. If the two sides can’t reach a compromise, though, it is possible this year’s Burning Man could be the last on federal land.

Burning Man got its start in San Francisco in 1986 when two friends built a man out of wood and burned it on a beach as part of a summer solstice celebration. The “man” was ritually burned each year after, in a ceremony that moved to a playa, or dried-up lake bed, in Nevada’s Black Rock Desert in 1991 and now lasts eight days.

At a public hearing on the proposed changes in Lovelock, Nev. on April 9, some Burners were incensed.

“Are you trying to kill the event?,” asked Cameron Bingham, a 36-year-old substitute teacher who goes by “Uncle Buck.” 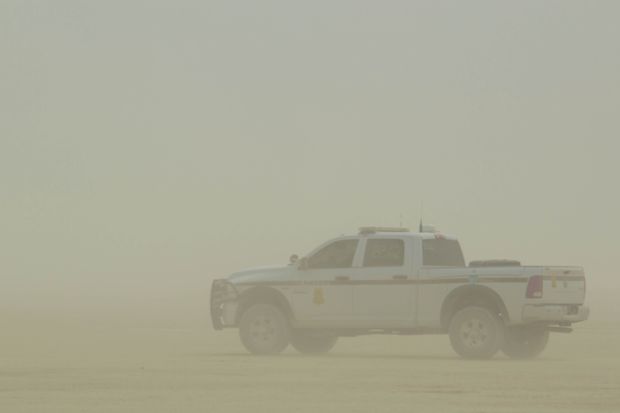 A Bureau of Land Management law-enforcement truck waits out a dust storm during preparations for the annual Burning Man festival in 2018.PHOTO: BLM/PLANETPIX/ZUMA PRESS

Mark Hall, a BLM field manager, said his agency doesn’t want to end Burning Man, but wants to work with organizers to address safety and sanitation issues. “You guys always surprise me with your solutions,” he responded.

Burning Man pumps as much as $63 million into Nevada each year, according to the government’s environmental report.

But there is a downside for nearby residents. Though the festival espouses an approach called “leave no trace” to take out everything brought in, refuse has to go somewhere and often ends up overflowing dumpsters in Reno or Gerlach, population 200, the closest town to the festival.

“This town gets trashed,” said Melanie McClenahan, a bartender at Bruno’s Country Club in Gerlach, where a two-lane road that gets jammed with Burners was nearly empty on a recent afternoon. “This is big money for Burning Man and they should be responsible.”

Burning Man officials estimate it would take more than 1,500 trucks carrying loads of 10 tons each to haul all of the festival’s refuse—a daunting if not impossible task.

“Burning Man does everything it can to make its impacts minimal,” said Ms. Benson, adding that event volunteers patrol the highways miles around the festival site for trash. “We know we can do better.”

In the era of mass shootings, Federal officials worry that Burning Man could be a prime target. Mr. Hall said officials from the Department of Homeland Security advised that physical barriers are needed to prevent someone from driving through a 10-mile perimeter that now has only a plastic fence. 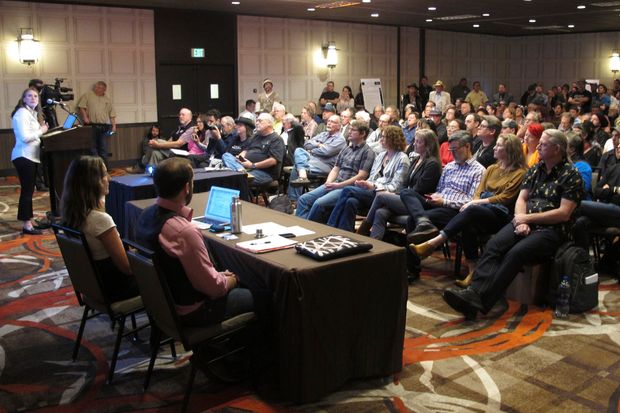 On April 8, nearly 200 Burning Man backers gathered in a casino meeting room to voice concerns about new conditions and restrictions the government wants to place on the counterculture festival. PHOTO: SCOTT SONNER/ASSOCIATED PRESS

Ms. Benson said Burning Man already employs advanced security techniques such as radar monitoring of its perimeter. She added that barriers would be logistically difficult to bring in and hurt the playa by creating sand dunes.

Federal officials also recommended private security guards be employed at the event to screen vehicles for weapons and drugs. Currently, Burning Man staff handles the screening of who enters and exits the festival. The event also has patrolling staff on its perimeter.

At another hearing on April 8 in Sparks, Nev., nearly 200 Burners derided the screening plan as excessive government interference. “Tell us how many more rangers we need,” Jennifer Kallmes, a veteran attendee, told federal officials. “We’ll do it ourselves. We don’t need you.”

Becky Andres, a BLM ranger, told the Burners the screening would be to their benefit. “This is about helping to keep you safe,” she said. The crowd responded with sarcastic laughs.