Hold on to your drug money! 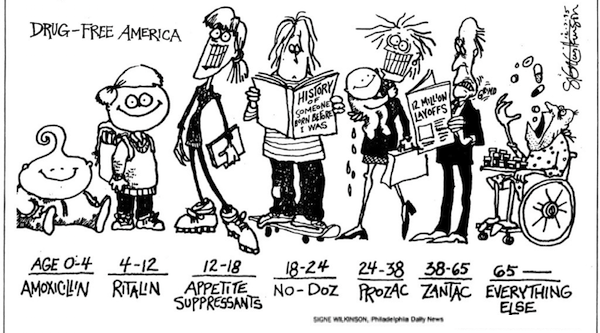 Our advice, if you’re in it, start pitching the over-the-counter stuff. If you’re thinking of getting into it, treat it like a bank heist. Take the money and run because just the bad PR could kill you.

It’s such a surefire recipe for misinformation and manipulation that nearly every developed country forbids the practice. Only the United States and New Zealand say it’s OK.

Yet a new study finds that U.S. authorities take such a lackadaisical approach to so-called direct-to-consumer drug ads that many of the commercials violate federal guidelines and, unsurprisingly, the quality of information presented is alarmingly low.

The concern, he told me, “is that these advertisements are doing more harm than good.”

Don’t expect a crackdown anytime soon. The U.S. Food and Drug Administration, amid a rollback of government regulations under President Trump, is considering even more leeway for drug companies to pitch prescription meds.

“It’s allowed because of a broad interpretation of free-speech rights,” Ross said. “The question is whether this information is accurate and useful, or whether these companies are yelling ‘fire’ in a crowded movie theater.”

The main problem, they say, is that these are complicated medical issues, and you simply can’t communicate everything a patient needs to know for an informed decision in under a minute.

As a result, according to the Yale study, “the information provided is unreliable and potentially misleading.”

The drug industry, needless to say, sees things differently. It presents itself as a friend to patients, striving first and foremost to heal the sick and safeguard the public.

Pharmaceutical Research and Manufacturers of America, an industry group, says direct-to-consumer ads are “designed to provide scientifically accurate information to patients so that they are better informed about their healthcare and treatment options.”

It says such marketing “encourages patients to visit their doctors’ offices for important doctor-patient conversations about health that might otherwise not take place.”

Or you can side with actual medical practitioners — that would be doctors — who say direct-to-consumer drug ads are dangerous.

The American Medical Assn. called for a ban on such ads in 2015, arguing that the billions of dollars drug companies spend on marketing pushes prices higher and “inflates demand for new and more expensive drugs, even when these drugs may not be appropriate.”

The Yale study looked at nearly 100 direct-to-consumer drug ads that aired in the United States between January 2015 and July 2016. Researchers found that about three-quarters of the ads were for chronic conditions such as arthritis and diabetes — the sort of illnesses that guarantee return business.

They also found that judging from the main characters in the ads, most target young or middle-aged women.

“None of the commercials contained quantitative information regarding risks or side effects,” the researchers found, meaning that viewers were left with incomplete knowledge of the potential dangers of a drug.

No less troubling, “13% of ads, all for diabetes medications, suggested off-label uses for weight loss and blood pressure reduction.”

This is significant. Under current FDA rules, prescription drugs only can be marketed for approved purposes, such as a diabetes pill that helps keep blood sugar under control. Unverified benefits — that is, off-label use — can’t be part of the sales pitch.

However, Ross said his team saw ads for Type 2 diabetes medications along the lines of: “This drug isn’t indicated for weight loss, however we have found that some patients lose weight.”

“Lawyers say this isn’t explicitly promoting an off-label use,” he told me, “but you could also say it is.”

Of course it is. Type 2 diabetes is most common among obese and overweight people. Like they’re not going to take added interest if a TV commercial says a pill might help them shed pounds?

Stephanie Caccomo, an FDA spokeswoman, declined to comment on the Yale study.

She said the agency is considering loosening its rules on off-label drug uses “as part of our ongoing efforts to best protect and promote the public health in light of ongoing scientific developments and 1st Amendment considerations.”

Drug companies spent more than $6 billion last year on direct-to-consumer ads, according to the consulting firm Kantar Media. Over 770,000 such ads were aired in 2016, the most recent year for which stats are available. That’s up a whopping 65% from 2012.

I asked PhRMA, the industry group, if it had any reaction to the Yale study finding that direct-to-consumer drug ads can be misleading and potentially in violation of federal rules.

She also cited a 2012 survey by a wellness magazine concluding that drug ads make many consumers feel “more involved with their healthcare.”

Not exactly a rebuttal of Yale’s findings, but OK.

Sen. Claire McCaskill (D-Mo.) last month reintroduced a bill to get rid of the tax deduction that drug companies claim for their billions of dollars in marketing expenses — legislation that Republican lawmakers have consistently opposed.

Although all businesses are permitted to deduct “ordinary and necessary expenses,” including marketing, critics say there’s nothing ordinary and necessary about direct-to-consumer drug ads. They weren’t even a factor for the industry until 1997, when the FDA relaxed its advertising guidelines.

In a recent report, the National Academy of Sciences said drug companies “spend substantially more on marketing and administration than on research and development.”

It called on Congress to “disallow direct-to-consumer advertising of prescription drugs as a tax-deductible business expense” to refocus manufacturers’ priorities.

A majority of Americans think prescription drugs shouldn’t be advertised on TV, according to a 2016 poll.

Where does that put us?

On the one hand, direct-to-consumer drug ads are opposed by doctors, academics, global healthcare authorities, nearly all other developed countries and most Americans.

On the other, they’re backed by multibillion-dollar drug companies.

So I guess we’re stuck with them.