The Greatest Idea Ever!

The Greatest Idea Ever! 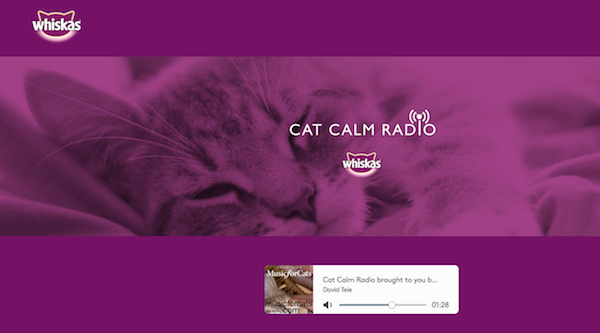 Steve’s breakdown: We don’t do creative reporting unless it’s so terrible we believe the agency is going to get fired. Remember PetSmart?

Anyway, BBDO Toronto & Whiskas just knocked it out of the park with ‘Cat Calm Radio’. It’s just the best idea I’ve seen in years and I’m listening to it right now. So sooooothing.

How is this a “lead”. It’s not but ideas like this are great when pitching clients, even though it’ll probably never get produced. Keep swinging for fences my friends!!!

FROM ADWEEK: Doth music have charms to soothe a savage Maine Coon or Turkish Angora on the long drive to the veterinarian?

You can find out today—which is officially Take Your Cat to the Vet Day!—thanks to a streaming internet service geared toward tabby’s taste in tunes.

“We wanted to do something impactful that reached beyond typical marketing,” says Derek Blais, associate creative director at BBDO in Toronto. The shop developed the campaign for Whiskas to emphasize that, in addition to selling pet-care products, the brand is “also devoted to helping cats live healthy and happy lives,” he says.

While humans respond positively to beats in music because we recall the soothing strains of our mothers’ pulse from the womb, cats, ever contrarian, develop differently. Their brains mature later, outside the womb, so they have no instinctive affinity for sounds resembling heartbeats. Instead—and research backs this up, apparently—they prefurrr slurpy suckling-of-milk vibes.

You can listen to Cat Calm Radio here.

“I had to take my own feelings out of the judgment,” he tells Adweek. “That was really very hard to do, since normal composing is essentially an intuitive process. I was certainly going for a relaxed feeling and sympathetic expression, but in a ‘language’ that cats understand.”

In addition to employing traditional instruments, Teie, an acclaimed cellist, manipulated spray bottles, scratched on canvas and even drummed on a toy football to craft the purrrfect soundscape. (And it’s strange that no one anywhere ever used that pun in a cat story before.)

Of course, dogs are way easier to satisfy when they go for a ride. If you crank up Nickelback, no problem. Fido just hangs its head out the window and cheerfully drools on your paint job. (Actually, they prefer to unwind with a little TV.)

For Cat Calm, BBDO staffers tested the tracks on some of their feline friends. “The cats loved it, and it really helped them stay calm during the loading, car ride and unloading on the way to the vet,” Blais says. “The goal is to get as much media coverage as possible and have people sharing Cat Calm Radio on social.”

Sure, cats may chill to the lugubrious groove—but after a few minutes of that bio-ambient drone, their humans may start yowling for release.