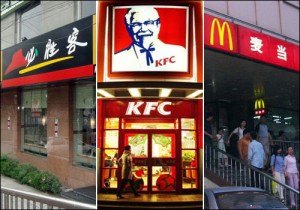 Steve’s breakdown: Funny, the same day we deside to start covering China, two major articles get published to back us up. So where’s the lead for your agency? Well if you have an international restaurant client, the answer is before you . . .

CHINA: The world’s largest restaurant brands have been growing rapidly in China, but the country’s dynamic growth holds more potential in the coming decades, even for established powerhouses, according to Bernstein Research.

“China is doing what any country does as it ramps up income curves: spending more on discretionary goods like restaurant visits,” Senatore explained. “It’s not until you hit about $15,000 in disposable income per capita that your demand for that starts to flatten out. There’s a long way to go before that happens in China.”

While some pressure on restaurant companies’ earnings could come from inflation of food and labor costs, other positive trends like increasing urbanization, wage growth and development of China’s interior could offset that burden, Senatore said. Overall, as more Chinese consumers report having less time to eat at home — and more money for eating away from home — Yum, McDonald’s and Starbucks stand to benefit from China’s explosive growth.

“All four chains have really targeted that [afternoon-tea] market,” Senatore said. “For Starbucks, that’s where almost all the traffic is, and they have almost no breakfast daypart. But Starbucks can use that tradition to introduce people to their brand and to coffee drinking, to the point where the morning daypart might become as prevalent as it is in the U.S.”

She added that some chains use that fourth daypart to repackage items they already offer in a bundled meal to improve value perceptions. Pizza Hut, for example, bundles a treat and a coffee for a price point around 15 renminbi, or about $2, which it can advertise as less expensive than Starbucks, she said.

China is a diverse market with development concentrated in the giant coastal cities of China’s eastern seaboard, according to Senatore. The central and western cities of China’s interior have not yet reached the size and purchasing power of the east, but the government is keen on driving growth in those areas and bridging that gap in the coming decades, she said.

Occupancy cost inflation will be a major headwind for brands looking to grow in China, especially in tier-one cities on China’s east coast. Senatore noted that average rents in Shanghai are higher than in New York City. “That makes it very difficult to make money in Shanghai,” she said. “It’s a developed market, and very expensive, so profit growth is going to come from lower-tier cities.”

Because of high costs, companies that are relative newcomers to China, such as Dunkin’ Donuts, may struggle to grow outside of major metro markets, where they first must gain a toehold to recruit hourly and managerial talent. McDonald’s and Yum are prepared to build out into China’s central and western regions, where costs are lower and growth potential remains high, according to Senator.

As for Starbucks, its strength in afternoon tea and branding associated with an affluent-lifestyle in China means it’s more likely to concentrate in cosmopolitan urban areas, Senatore noted.

“China will eventually look like the United States does for Starbucks,” she said, “with higher density in urban areas but much lower density in farther-out cities.”