This is not a lead: Five Shops Pitch Creative for GNC

Home Industry: For all marketersThis is not a lead: Five Shops Pitch Creative for GNC

This is not a lead: Five Shops Pitch Creative for GNC 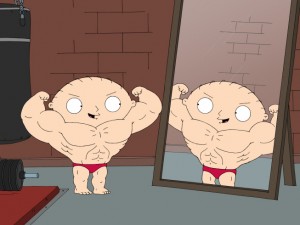 Steve’s breakdown and quick editorial note: Like Stewie’s steroid/GNC made muscles, new business news like this is fake. We don’t waste our subscribers’ time with it. That’s why you have never seen “agency wins account” news or “account chooses finalist” news or “campaign launch” news because it’s all worthless.

So after this post, we will get back to your 100% up to the minute new business news you can actually make money with!

PITTSBURGH, PA: GNC is in the midst of a conducting a creative search process to find an agency to replace Omnicom Group’s Arnell Group, according to industry executives.

The agency change is being driven by GNC’s exec VP-chief marketing officer and head of e-Commerce, Jeff Hennion, who joined the company at the beginning of this year after leading marketing for Dick’s Sporting Goods.

GNC is said to be satisfied with its brand awareness levels, but wants to transform the company from a niche player known for selling vitamins to one that’s more mainstream and is broadly associated with health and wellness. The moves also come as GNC is actively expanding its e-commerce business, as demonstrated by its acquisition last month of LuckyVitamin.com, an online seller of nutritional supplements.

People close to the situation say the search the process, which is being conducted in consultation with New York-based Consigliere Brand Capital, began with 11 agencies, and then was narrowed it down to five shops. All of the contenders now are independent and not owned by a holding company. They are: McKinney, 22Squared, Doner, Walrus and Cramer-Krasselt. Cramer-Krasselt currently handles GNC’s offline media-buying duties, while True Action is GNC’s digital media agency, and neither of those accounts are in play.

As of this summer, GNC counted more than 7,400 locations, with more than 5,000 of those in the United States. It also has franchise operations in 50 countries.

Several people familiar with the matter said the account has an estimated budget of more than $50 million. A new agency could be picked before the end of October.

Arnell — whose relationship with GNC was quietly terminated earlier this year — was not invited to participate. The last campaign was dominated by print ads and outdoor billboards in black and white, with mantras such as “Live Radiantly” and “Live Raw.”

It’s a significant departure from Arnell’s client roster, which currently includes Belvedere, ConEd and Pizza Hut’s International Delivery business, an account it picked up recently. It also has a project for Christie’s Fine Art storage.

Arnell did not immediately respond to a request for comment on the matter, while Pittsburgh, Pa.-based GNC, which is in a quiet period right now ahead of its initial public offering, declined to comment.