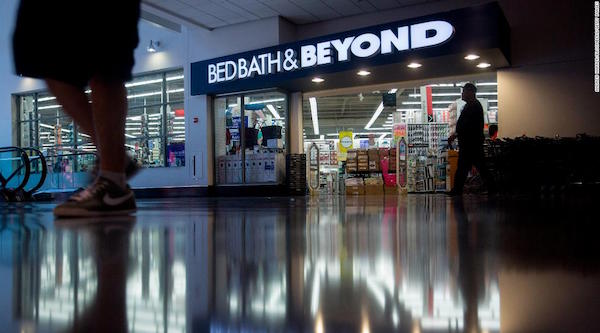 Steve’s breakdown: Sometimes we tell our members twice they need to look for an agency review. Both of the post we published were in our “Account Review Prediction” category which is were your eyes should be living.

At the bottom of this page is the article announcing the review and who’s already involved.

Fixing this retailer might need to start with advertising

UNION, NJ: Bed Bath & Beyond began a review of its media and creative in June to revamp its brand ahead of the holiday season, several people close to the business confirmed to Ad Age.

The people revealed that Publicis Groupe, Omnicom and WPP’s GroupM agencies are all participating, as is Oakland, Calif.-based EVB, which bought back its independence from Omnicom in 2014. In May, EVB created a digital campaign for Bed Bath & Beyond, centered around a modern couple who can’t grasp the concept of “offline shopping.”

Bed Bath & Beyond declined to comment. Neither Publicis, Omnicom, GroupM nor EVB responded to Ad Age’s requests for comment.

The people said Bed Bath & Beyond is seeking agency partners to help facilitate and develop a full-brand re-launch ahead of the holiday season and expects a decision to be made in mid-August.

R3 co-Founder and Principal Greg Paull estimated Bed Bath & Beyond’s annual budget for measured media to be $110 million. According to the people close to the business, the media portion of the budget is $30 million.

This marks the first time Bed Bath & Beyond has launched an agency review at this scale. Paull said the last time the retailer placed any portion of its account in review was in 2015. In May of that year, Bed Bath & Beyond hired Kepler Group, a data-driven marketing firm, to handle its digital-display planning, buying and optimization.

Kepler Group also did not return a request for comment so it is unclear if it still works with Bed Bath & Beyond or will compete in the current review.

Bed Bath & Beyond had committed to improving its target-marketing tactics in a statement last June. It said that a “key focus” of its marketing strategy over the following 18 months would be to “tailor timing, content and design of messaging to each customer, depending on their attributes, context and behaviors.”

Bed Bath & Beyond—the North American operator of 1,530 retail locations in the U.S., Canada, Mexico and Puerto Rico—has been undergoing a significant business transformation that includes plans to remodel its stores and return to growth, following mounting pressure from activist investors.

For its most-recent fiscal first quarter, Bed Bath & Beyond reported a net loss of $2.91 cents a share and a comparable store-sales decline of 6.6 percent.

Activist investors—Legion Partners, Macellum Capital Management and Ancora Advisors—had first accused the company of inadequate leadership and a lack of innovation in its retail stores in April, pushing for the company to overhaul its board of directors and to cut costs. On Wednesday, Bed Bath & Beyond announced it would be cutting 7 percent of its corporate staff, including the chief operating officer position. Earlier, in May, Bed Bath & Beyond also settled with the investors by replacing four of its directors with their recommendations.

“We are at an important inflection point in the company’s history,” Mary Winston, interim CEO of Bed Bath & Beyond, said in May. “With the benefit of a newly transformed board, the company is committed to taking the right actions to further enhance our competitive and financial position, transform Bed Bath & Beyond faster to win in the omnichannel marketplace and execute on our priorities.”