Getting this sports brand Its edge back

Home Region: Mid-Atlantic USAGetting this sports brand Its edge back

Getting this sports brand Its edge back

Steve’s breakdown: Once heralded as the next Nike, the sportswear giant has been hurt by slumping sales and unflattering revelations about its corporate culture. Actually, we expect their new line “The only way is through” is off and will continue hurting them so keep an eye on them.

BALTIMORE, MD: In the summer of 2018, two top Under Armour executives traveled to the West Coast on a critical mission. Kevin Plank, the sports apparel company’s founder and chief executive, and Patrik Frisk, its president and chief operating officer, needed to persuade Stephen Curry, the Golden State Warriors star and the company’s highest-profile endorser, not to leave the brand.

The two sides had grown increasingly frustrated with the relationship, said two former Under Armour executives familiar with the matter, who spoke on condition of anonymity to discuss the previously undisclosed meeting. In 2017, Mr. Curry took public exception to a comment by Mr. Plank calling President Trump “a real asset” to the country, prompting the executive to take out a full-page newspaper ad to explain what he said about Mr. Trump “did not accurately reflect my intent.”

But the relationship between the two remained tense. Mr. Plank was unhappy that Mr. Curry, whose endorsement deal pays him millions of dollars a year, would rarely wear Under Armour clothing to N.B.A. games. Mr. Curry was upset that sales of the signature Curry 3 shoe had been weak.

At the meeting, participants found a solution that would showcase just how much Mr. Curry meant to the company. Mr. Plank and Mr. Frisk agreed to build a separate business around him, one reminiscent of what Nike had done for Michael Jordan two decades before. The company brought on the former executive who had overseen the creation of the Jordan brand at Nike to run the Curry brand and promised Mr. Curry much more involvement in the development of his shoes. Mr. Curry decided to remain, and a crisis was averted.

In its promise and its turmoil, Under Armour’s relationship with Mr. Curry encapsulates the company’s broader struggles in recent years, and represents a critical piece of its comeback hopes.

Once heralded as the next Nike, Under Armour has faltered, hurt by slumping sales and unflattering revelations about its corporate culture. It is grasping for a hold in the fiercely competitive sports apparel market even as it undergoes the biggest management shift in its history. Investors, analysts, and competitors are wondering if Under Armour can successfully redefine itself and once again win over consumers, or whether the company’s best days are behind it.

Not long ago, Under Armour was a darling of investors. But it has since faced tough scrutiny, resulting in lawsuits from shareholders, who accuse the company of misleading investors, and media coverage around real estate deals involving the company and Mr. Plank’s private holdings. Questions have also arisen about a culture that allowed strip club visits to be expensed on corporate credit cards and, more recently, a disclosure by The Wall Street Journal that federal authorities are conducting investigations into accounting practices.

It is a far cry from 2015, when Under Armour, founded in 1996 as a maker of high-tech athletic gear, had overtaken Adidas to become the second-largest sports apparel company in the United States by sales, behind only Nike. It posted 26 consecutive quarters of 20 percent or greater year-over-year revenue growth, and its stock more than doubled in two years’ time.

Athletes it sponsored were among the biggest names in the N.B.A. (Mr. Curry), the N.F.L. (Tom Brady), major league baseball (Bryce Harper) and golf (Jordan Spieth). Under Armour signed U.C.L.A. to a sponsorship agreement worth $280 million, the largest ever for a university and a challenge to Adidas and Nike’s dominance of college athletics. The ballerina Misty Copeland gave the company a presence in the fine arts. It spent a total of about $700 million acquiring apps like MapMyFitness and MyFitnessPal, with visions of creating a mobile digital health and fitness community.

Now, revenue growth has slumped, increasing less than 1 percent in the first nine months of last year. The company’s stock price has collapsed to around $21 a share from a high of $51 in 2015. Worse, the brand finds itself out of step with consumer taste.

“The fashion cycle moved away from them. They stayed true to their muse, performance footwear and apparel,” said Matt Powell, an analyst with the NPD Group. “But that’s just not where the business is. Right now, it’s all about fashion and

There is no one cause of Under Armour’s struggles. Some factors, like the bankruptcies of the retail giants Sports Authority and Sport Chalet in 2016, were out of the company’s control.

But interviews with several current and former Under Armour employees as well as competitors, advisers to athletes, and financial analysts also point to a company that tried to do too much too fast. It expanded into sports in which it had little expertise and failed to articulate a strategy for its expensive tech acquisitions. It eschewed the athleisure trend, which has buoyed sales at Nike and Adidas, and struggled to translate its brand to an international audience.

And when Mr. Plank hired executives from Nike, Adidas and elsewhere to help expand or fix crucial businesses, many said they were viewed by Under Armour employees with a mixture of suspicion and disdain. It was a disconnect that played out in how Mr. Curry’s shoes were made and marketed.

“Loyalty is good, but it can also create blind spots,” said Aaron Miller, who worked as a senior director of footwear at Under Armour from 2013 to 2015, after 18 years at Nike. Mr. Plank “was so loyal to the guys who were there before that when the Nike guys came in, suddenly, they were insiders and we were outsiders.”

This month, Mr. Plank, 47, officially stepped down as chief executive and was replaced by Mr. Frisk, 57. Mr. Plank now holds the titles of executive chairman and brand chief, and Mr. Frisk reports directly to him.

Under Armour declined to make any executives available to comment for this article. In a statement, a spokeswoman said the company was proud of the global brand that it continued to build, adding, “Like the athletes we serve, we are acutely aware of our strengths and weaknesses and the opportunities that are inherent every time we train, compete and recover.”

From its early days, Under Armour made its mark as a tech-focused sports apparel company. It didn’t just make clothes for athletes; it made clothes that aimed to improve their performance. Beginning with its first product, a T-shirt that wicked away sweat, Under Armour redefined the category, from its HeatGear and ColdGear fabrics in the late 1990s to, more recently, sleepwear intended to help athletes recover from a big game.

With Under Armour’s stock soaring in the fall of 2015, Mr. Plank and his top lieutenants believed nothing could stop the company’s rise. But others were less sanguine, concerned the company’s go-go-growth culture and its lack of discipline around product planning and expenses would result in a reckoning.

One internal debate came that same year, over how many pairs of Curry 2 shoes to manufacture.

The first Curry shoe had sold out immediately, and Mr. Miller wanted to double the number of Curry 2 shoes produced. That quantity, he believed, would also sell out, increasing demand for the next model, the Curry 3. But top executives, he recalled, requested three times the number of shoes he recommended, even as he argued that could cause a glut.

The executives won, and Curry 2 shoes eventually flooded the market, winding up on sale racks. It didn’t help that one all-white low-top version was ruthlessly mocked as a “dad” shoe. The large inventory combined with infighting over and micromanaging of the shoe’s design set the stage for the lackluster sales of the Curry 3 in 2016, Mr. Miller said. On a 2017 earnings call, Mr. Plank blamed a “sluggish signature market” for “softer than expected” sales of the shoe. 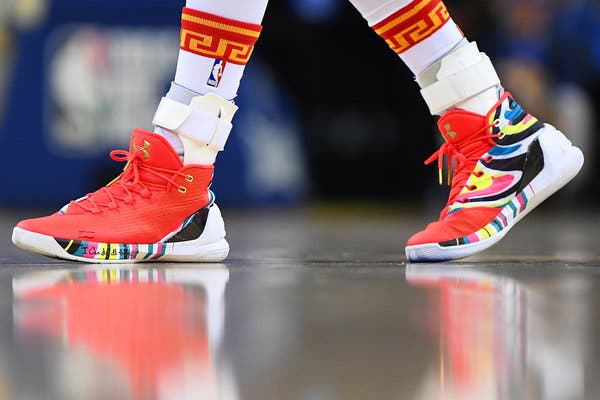 “It’s crazy. Why recruit talented, proven people and then not listen to them?” said Mr. Miller, who left the company a few months later.

A spokeswoman for Under Armour declined to comment on the debate around the Curry 2.

Three former executives said that decisions around products were often driven by instinct, rather than consumer analysis of the market.

Two pointed to the DJ, a slip-on shoe for women that they said sold poorly. Yet, the former executives said, the DJ could not be killed because it was named for Mr. Plank’s wife, Desiree Jacqueline Guerzon, who goes by D.J., and she really liked the shoe.

Under Armour declined to respond to questions about the shoe.

Under Armour’s rush to compete for college endorsement contracts resulted in other headaches. Under the terms of the contracts, it supplied jerseys, cleats and sneakers for football and basketball teams. But it also quickly had to manufacture apparel and shoes for other sports, like running and volleyball, in which it had much less expertise.

A former executive said some runners at Under Armour-sponsored colleges refused to train in the company’s shoes because they worried they might get hurt. Instead they took them to sporting goods stores and tried to exchange them for shoes from other companies.

A spokeswoman for Under Armour declined to comment on its college endorsement deals.

Over the last two years, Mr. Frisk, the new chief, has been given credit for introducing more controls around inventory levels as well as increased oversight on expenses and product planning. Those moves have already improved Under Armour’s profit margins.

The challenge now is figuring out how to increase revenue and recapture the magic that propelled Under Armour’s meteoric rise.

Some Wall Street analysts are skeptical of an approach that focuses too much on products marketed as performance-enhancing, especially for a public that wears basketball shoes or track pants to the grocery store or the movies.

Still, Under Armour and Mr. Plank are undaunted in their strategy. This month, the company released its latest advertising campaign, “The Only Way Is Through,” featuring the swimmer Michael Phelps, D.K. Metcalf of the Seattle Seahawks, and other Under Armour-sponsored athletes sweating and gasping through strenuous workouts.

“The world did not need another competent apparel or footwear manufacturer,” Mr. Plank recently told attendees at the National Retail Federation conference in New York. “What the customer needs is a dream.”

Kevin Draper is a sports business reporter, covering the leagues, owners, unions, stadiums and media companies behind the games. Prior to joining The Times, he was an editor at Deadspin.