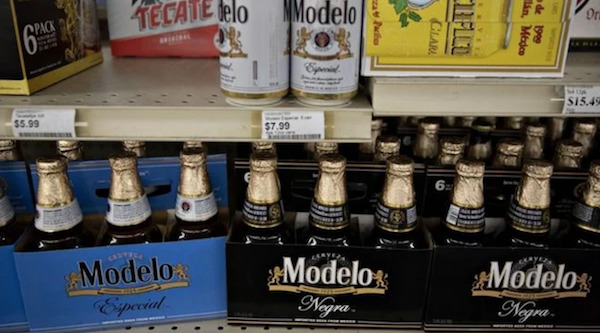 Steve’s breakdown: In case you missed it during the break . . .

VICTOR, NY: The Mexican import, handled by WPP’s Cavalry since 2018, is among the fastest-growing big brands in the beer business.

Anyone following the beer business — or VinePair, for that matter — has likely taken notice of the extreme success of Modelo Especial. The Mexican lager has steadily risen in popularity in recent years, becoming America’s best-selling import beer and second-best-selling beer, period, after Bud Light. It’s also the fifth-largest brand in the beer business, according to AdAge.

Which is why I took notice when AdAge recently reported that Modelo parent company Constellation Brands is putting the most important beer in America right now up for creative agency review — meaning it’s looking for a new agency to fan its fiery success.

This may sound counterintuitive, but it bears resemblance to another decision Constellation CEO Jim Sabia made more than a decade ago. In what Beer Business Daily refers to as “a classic Sabia move,” he changed the already-hot Corona Especial campaign to one we’re all familiar with now: “Find Your Beach.”

Surely Cavalry, Modelo’s current advertising agency, can’t be to blame. After all, it carried Modelo Especial to its incredible heights. In the words of Cavalry CEO Marty Stock, Cavalry has been behind the beer’s “record sales performance,” solidifying its stature as “the poster brand for marketing to a new America.” Last week, Modelo announced an extension of its current (Calvary) campaign launching “Fighting Spirit Collections” streetwear.

(The collection is a reference to Modelo’s tagline, “brewed with a fighting spirit.” Cavalry’s tagline, in case you were wondering, is “ready to fight for your brand.”)

Cavalry will likely pick itself up. The agency itself was created for MillerCoors, then later got dumped and changed hands to Constellation where it also works on Corona Premier, Corona Refrescas, and — er, awkward — Ballast Point (the infamous billion-dollar beer brand Constellation purchased and later unloaded in 2019).

Constellation’s decision to shop around America’s fastest-growing beer brand is clearly a reflection of its, or Sabia’s, ethos: Embrace risk and switch up strategy when things are hot. Is this the next Ballast Point or a future Snoop Dogg ad? I’ll happily continue sipping my mezcal-and-Modelo boilermakers until either happens.

It’s not every day a brewer departs their job and makes headlines. That is, of course, unless that brewer is Brienne Allan announcing her departure from Notch Brewing, reported by Brewbound on Wednesday. Allan, who rose to beer community notoriety in May after providing a platform for women and others in the beer industry to share their experiences with sexism at work via her Instagram account, @ratmagnet, says she will move on to work related to Brave Noise.

Along with impactful initiatives Black Is Beautiful, All Together, and People Power, Brave Noise is a recently launched beer collaboration and call to action. Key to the Brave Noise mission is that participating breweries not only develop but also publicly display a code of conduct that ensures a safe working environment for employees and space for consumers.

“We looked at other collabs and also thought about what was missing at breweries: transparency,” Allan told VinePair last month. “By asking for a code of conduct and for it to be displayed publicly, we felt this was one way for staff and consumers to hold companies accountable.”

Allan’s departure from Notch sets an inspiring precedent. She bore the burden of becoming an accidental advocate for something that’s extremely painful for those who experience it. She started a national conversation that has led to real, earth-shattering change for some breweries. She forced an entire industry to come face to face with — and respond to — something that has existed for far too long.

As a woman who has worked in, written about, and participated in the beer industry and community for more than a decade, this move is one I won’t soon forget. It’s people and initiatives like these that are chipping away at the long-endured walls we’ve put up in the workplace and in public spaces that allow abuse, neglect, and prejudice to happen. Like Lily Waite and the Queer Brewing Project, Marcus Baskerville and Black Is Beautiful, and Breeze Galindo’s Other Half Women’s Forum, Allan and Brave Noise are the next signs of what’s to come in the future of beer.

Last month, we learned about Molson Coors’ plans to ramp up production of hard seltzer and ready-to-drink (RTD) brands, and its foray into spirits with Five Trail American Whiskey (which, by the way, is launching this week). One thing Molson Coors CEO Gavin Hattersley didn’t mention on that epic earnings call was the nationwide launch of a new Blue Moon SKU: Moon Haze, the brand’s “first-ever hazy and juicy pale ale.”

Apparently Moon Haze is already award-winning, having taken home a gold medal in the “Juicy or Hazy Pale Ale” category from the Great American Beer Festival last year. So, what makes it so new? Well, it’s “brewed with dried, whole oranges,” says the press release, and this “brings a bold, juicy flavor and Blue Moon’s signature orange color together to invigorate the hazy craft beer scene.”

One might wonder, as I did, how this is any different from the original Blue Moon. As the press release alludes to, Blue Moon Belgian White is already recognizable for its cloudy, orange appearance. It’s also brewed with orange peel, along with coriander; and it’s served at bars and restaurants with a literal slice of orange on the rim. Hazy? Check. Juicy? Check.

America’s No. 1 craft beer brand is not launching its “first-ever hazy and juicy” beer — it’s launching its first pale ale. This is far more interesting than Molson Coors doing what every other brewery in America is doing (see: hopping on the haze train). Instead, it’s another, slightly subtler power move from the parent brand — and if it goes well, which it probably will, it’s also a precursor to the next big debut: Blue Moon Hazy IPA.