Steve’s breakdown: They say there are 3 in the finals of this pitch but that doesn’t mean you’re out if you have the right stuff. If you do, you know who to call at Diageo. Procurement! They are very big about being an “approved vender”. 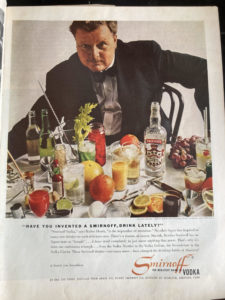 The review, which started in the spring, brings the vodka-brand’s relationship with 72andSunny to a close after nine years.

The LA-based ad agency has created campaigns for Smirnoff featuring celebrities Ted Danson and Chrissy Teigen, as well as transgender artists such as dancer Lucy Fizz, DJ Honey Dijon and actress Laverne Cox. Many of its campaigns have focused on inclusivity within the LGBTQ+ community and Canadian immigrant groups.

“We are really proud of all our work with 72andSunny for Smirnoff and wish the team all the best,” a Diageo spokesperson said over email. “We felt that spring was the right time to begin to review our global creative agency support for this iconic global brand.”

Both parties agreed that 72andSunny would not participate in the pitch, according to sources. 72andSunny declined to comment.

The review, which is being run internally by Smirnoff’s procurement team, initially cast a wide net. According to sources, up to 20 agencies were invited to pitch.

Three agencies are now battling it out for the account, which is said to be worth $3 million, according to sources.

However, sources say Smirnoff declined to share fees associated with the account with contenders in the initial stages of the pitch.

Smirnoff is looking to finalize its choice by autumn.