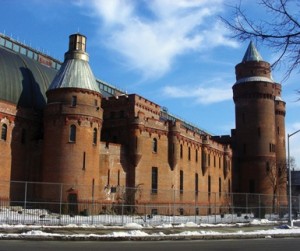 Steve’s breakdown: This is one of Mayor Bloomberg’s last big projects and to make sure it flies, it’ll need advertising guidance!

THE BRONX, NY: An empty armory is set to become what’s being billed as the world’s largest indoor ice skating center, Mayor Michael Bloomberg announced Tuesday in his latest bid to expand the Big Apple’s claim on superlatives.

The plan points up Bloomberg’s ambition to leave a legacy of think-big projects, and it’s poised to resolve a yearslong, sometimes divisive debate over what to do with the historic armory and what the city’s poorest borough would get out of it.

“Allowing this armory to remain empty and stand as a symbol of the abandonment that once plagued the Bronx was simply unthinkable,” Bloomberg said as he stood in the chilly, vaulted, four-acre-plus expanse that was the armory’s drill floor.

“The Bronx is building,” he added, a riff on Howard Cosell’s famous line, “the Bronx is burning,” uttered during a 1977 World Series game at Yankee Stadium to describe a fire nearby. The line came to encapsulate the borough’s urban blight of the time.

The plan envisions turning the 1917 building into a year-round ice-sports hub, attracting both hobbyists and professionals. Organizers project 2 million visitors a year at the attraction, where one rink would be flanked by 5,000 seats for hockey tournaments and ice shows. While the neighborhood is not usually thronged with visitors, the project includes a 480-car garage and is right by a subway station.

But backers also are emphasizing elements aimed squarely at local residents, including a planned after-school program, 50,000 square feet of “community space” with details to be defined, and a promise to pay the facility’s estimated 260 workers at least $10 an hour, an issue that sank an earlier plan to turn the armory into a shopping mall.

The center could “give hope and optimism to many kids in this area,” Messier, who was the team captain when the Rangers won the Stanley Cup in 1994.

“This is a facility that will attract some of the greatest athletes in the world, both figure skaters and hockey players,” said Hughes, who took gold at the 2002 Winter Games, adding that “I also see it as a foundation for this community’s future.”

A number of other big projects have sprouted in the Bronx in recent years, including the new Yankee Stadium, which opened in 2009; the Fulton fish market, which moved from lower Manhattan in 2005, and a shopping center that’s being converted to a suburban-style mall. There are almost 2,000 more businesses in the borough now than there were a decade ago, Bloomberg said.

About four miles north of Yankee Stadium, the 1917 building is a Romanesque-style sprawl of turrets and crenellations. It’s on the National Register of Historic Places. It hasn’t been used for military purposes since the 1990s, though it has at times been rented for film shoots and used for city storage.

The shopping mall plan emerged in 2008 but foundered the next year, when the City Council voted it down amid concerns about how it would affect local businesses and how well its own workers would be paid. Community groups said the mall, which was to get city tax breaks, should pay employees at least $10 an hour. Bloomberg and the developer said that wasn’t realistic.

The episode contributed to the City Council’s 2012 decision to set a “living wage” of $10 an hour for employers that get at least $1 million in city subsidies.

The mall was to offer more than four times as many permanent jobs, but Bloomberg said the ice facility likely “will provide more services to the community.”

The ice center developers will pay to build their project, with no tax incentives or other help from the city beyond the $30 million it has spent on environmental cleanups and repairs, city Economic Development Corp. President Seth Pinsky said. The developers will pay rent, part of it based on 5 percent of the facility’s gross revenue, estimated at $1 million or more a year, the agency said.

Now in his last of a dozen years in office, Bloomberg has relished sweeping redevelopment plans, from the New York Nets’ new stadium – part of the biggest project in Brooklyn’s recent history – to an ultimately failed bid to build a football stadium on Manhattan’s West Side. Last fall, he unveiled plans to build the world’s largest Ferris wheel on Staten Island.